Timothée Albasser is a neuropsychologist at the Hautepierre Hospital in Strasbourg, France. He reveals the secrets of Alzheimer's disease: diagnostic criteria, risk factors, evolution, treatments...

Hello Timothée, thank you for agreeing to answer our questions. What is Alzheimer's disease and how does it progress?

Alzheimer's disease, first described in 1907 by Alois Alzheimer, accounts for the vast majority of dementia cases after the age of 65. It begins insidiously with a difficulty in remembering recent events and disorientation in time and space. Progression is gradual, over eight to ten years, with a progressive accentuation of cognitive deficits (memory, language, gesture skills, recognition disorders, intellectual functions) and of mood and behavioural disorders. The patient loses all autonomy and death occurs as a result of infectious or vascular complications.

Given such a variety of symptoms, how is Alzheimer's disease diagnosed?

Alzheimer's disease is the most common cause of dementia in the elderly. It is characterized by the presence of lesions: amyloid plaques (deposits of the beta-amyloid protein) and neurofibrillary degeneration (disaggregation of the tau protein into filaments that form tangles; an indicator of neuronal death), which constitute the waste products of this pathological process. The most commonly used clinical diagnostic criteria are those described in the DSM-IV-TR, the most recent version of the Diagnostic and Statistical Manual of Mental Disorders, published by the American Psychiatric Association (Guelfi, 2003). They place an alteration of anterograde and retrograde memory at the centre of the cognitive problems present in the disease.

B. Cognitive deficits in Criteria A1 and A2 cause significant impairment in social or professional functioning and represent a significant decline from the previous level of functioning.

C. The progression is characterized by progressive onset and continued cognitive decline.

D. Cognitive deficits in criteria A1 and A2 are not due to:

E. Deficits do not occur exclusively during the course of a delirium.

F. The disturbance is not best explained by an Axis I disorder (e.g. major depressive disorder, Schizophrenia).

This coding is based on the presence or absence of a clinically significant behavioural disturbance:

Finally, it is necessary to specify the subtypes:

Are there exclusive tests available to assess Alzheimer's disease or other dementias?

A neuropsychological test does not measure a particular function, but a set of cognitive functions.

When neuropsychological assessment is completed, the presence or absence of a syndrome is determined. Examples of possible syndromes include "hippocampal disorder" (memory impairment with accelerated information forgetfulness), brain dysfunction (impairment in the performance of non-routine activities, such as inhibition, problem solving or organizational abilities) or Gerstmann syndrome (impairment in calculating, reading and right-left indistinction).

These syndromes are not pathology-specific: for example, hippocampus syndrome is often present in Alzheimer's disease, but can also be present in depression, Lewy body dementia or after a stroke or head injury. It is therefore the combination of the results obtained by neuropsychological tests, but also the way in which the disorders begin (severe or progressive), their evolution and the results of the complementary examinations carried out (lumbar puncture, magnetic resonance, blood tests) that will facilitate the diagnosis. There is therefore no test for each pathology.

Generally speaking, dementia is a group of diseases that is very prone to misdiagnosis, why?

Because their causes are still unknown today! We talk about the "amyloid cascade hypothesis" in Alzheimer's disease or the "genetic involvement hypothesis" in frontal lobe degeneration. Without knowing the cause and development of the disease, it is difficult to make a diagnosis.

Another reason is that the same syndromes can be found in several pathologies, which is the reason for differential diagnosis.

What are the risk factors?

There are two main risk factors for Alzheimer's disease:

What treatments are currently available?

There are currently two main groups of treatments on the market.

What do you think of their effectiveness? Is it proven?

Currently, there is no drug that can cure the disease.

The effectiveness of available treatments is still under debate. However, scientific studies have proven that they significantly reduce the disease's progression. As a result, cognitive disorders progress more slowly. The quality of life of the patient and caregiver improves and the patient's ability to stay at home increases.

The third and final instalment of our interview is coming soon:
>> Clinical Research: What Advances Can We Hope for in Neuropsychology? 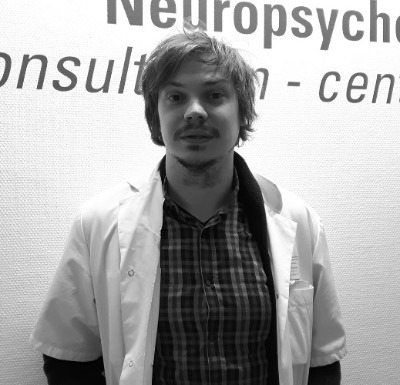 Timothée Albasser is a neuropsychologist at the CMRR (Centre Mémoire de Ressources et de Recherche) of the Hautepierre Hospital in Strasbourg since April 2014. Holder of a Master II in clinical and cognitive neuropsychology obtained at the University of Strasbourg, he also holds an inter-university diploma in Normal Memory and Memory Pathologies obtained at the University of Medicine of Strasbourg.

He is active in clinical neuropsychology, in the context of memory consultation and research neuropsychology (Hospital Clinical Research Programme and therapeutic trials), as well as at the Saint-François Geriatric Day Hospital. At the same time, he also works as a clinical studies technician, mainly for cohort studies. He is part of the team at the CMRR in Strasbourg composed of Professor Blanc, Dr. Cretin, Dr. Martin-Hunyadi and Dr. Philippi. The CMRR team is active in research and in the publication of scientific articles, particularly in the field of Alzheimer's disease and Dementia with Lewy bodies.