Melanoma: How do you know if a mole is dangerous?

We all have many moles on our bodies. Also called naevi, they are most often characterised as small brown spots, raised or flat, and usually appear before the age of 30. Their number on the body depends on certain hereditary factors but also on exposure to the sun. Most of them are not dangerous.

Nevertheless, it is still essential to keep an eye on moles because some could turn into melanoma (a malignant tumour). So, what are the signs that should alert us to a problem?

Adults have on average about twenty moles on their bodies. The parts of the body that are most exposed to the sun tend to have more. For men, these are often the back and for women, the legs.
While moles are harmless, they can change over the course of one's life. It is therefore essential to monitor them regularly.

Why can moles be so dangerous?

Skin cancers are the fifth most frequently occurring cancers in the UK, with 16,200 new melanoma cases each year. That makes 44 new cases per day.
According to Cancer Research UK, in the last ten years, melanoma skin cancer incidence rates have increased by almost 40%. Rates in women have increased by 30%, and rates in men have increased by 47%.
This evolution can be explained by increasing trends of sun exposure. Melanoma, if treated late, cannot be cured. For this reason, sun protection measures and early detection are the only ways to reduce the incidence of skin cancer.

Colour, size, shape: what are the warning signs?

According to Emmanuel Ricard, delegate for prevention and promotion of screening at the French League Against Cancer (la Ligue contre le Cancer), a mole that changes, spreads or changes colour, becomes thicker or rough should be checked immediately.
Furthermore, if you have more than 30 moles, or have already had one removed, it is recommended that you see a dermatologist once a year.

How to distinguish a mole from a developing melanoma?

In 80% of cases, melanoma resembles a mole at the beginning of its development. It is therefore complicated to differentiate a developing melanoma from a recent naevus. In only 20% of cases, the melanoma comes from the malignant transformation of an existing mole.

Is anyone more at risk of developing skin cancer?

Some people are at higher risk of developing skin cancer from a naevus. This may be related to genetic factors (very fair skin, eyes and hair or a family history of melanoma or other skin cancers). Environmental factors can also play an important role (numerous sunburns during childhood or a tendency of over-exposing one's self to the sun).

How to early detect skin cancer yourself?

As skin cancers appear in many shapes and sizes, it is important to be familiar with the warning signs. These characteristics can be easily remembered with the ABCDE rule:

A: for Asymmetry. If you were to draw a line through the centre of the mole, the two sides will not match.

B: for Borders. The borders of an early melanoma tend to be uneven, while benign moles tend to have smoother, more even borders.

C: for Colour. Multiple colours are a warning sign, as common moles are all one colour. Melanoma may have shades of brown, tan or black.

D: for Diameter. Melanomas are usually the size a pencil eraser (about 6 mm) or larger.

E: for Evolving. If you notice changes in shape, size, colour, elevation or new symptoms such as itching, bleeding or crusting, it is a warning sign. 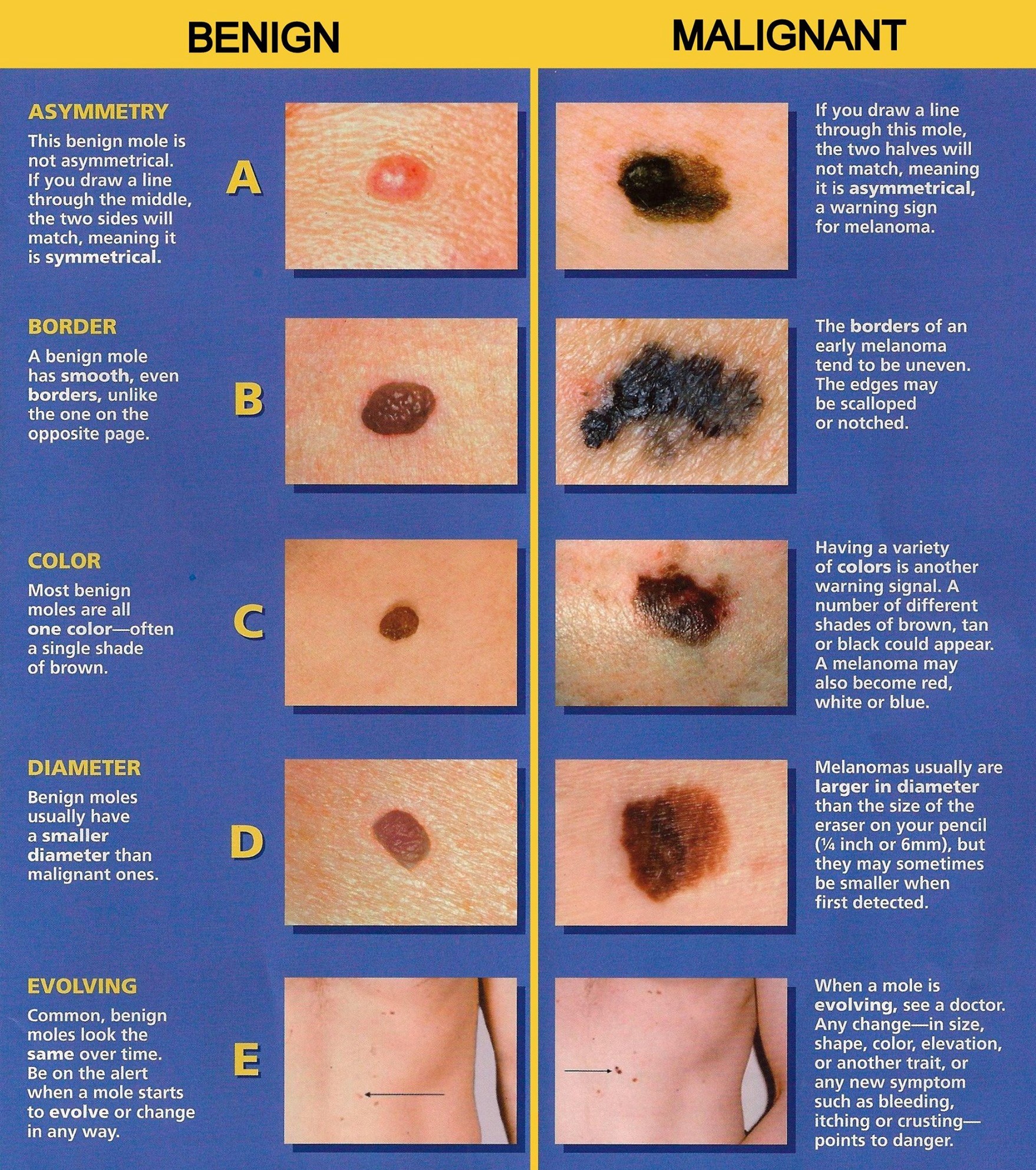 Biopsy: the key test for diagnosis!

Early melanomas can be difficult to differentiate from an atypical naevus (a melanoma-like mole). If your dermatologist has any doubts, he or she will surgically remove your mole immediately and have it analysed. The purpose of biopsy is to remove the supposed tumour but also, after examination, to make a diagnosis. It is usually performed under local anaesthesia. The removed skin fragment is sent to an anatomical pathologist (a doctor who analyses tissue samples) for microscopic analysis. Study of the sample can confirm (or not) the malignant nature of the mole and will make it possible to diagnose it (or not) as skin cancer.
Please note that any destruction of a mole, whether suspicious or not, for example by laser, is to be avoided because no analysis can be done afterwards.

How is a melanoma removed?

The broad excision of a melanoma is performed under local anaesthesia. This operation makes it possible to remove and heal the lesion (most of the time) if it is detected early. This procedure is painless and takes no more than a few minutes.

Additional examinations such as X-rays or ultrasound scans are then required to look for other possible lesions. These examinations make it possible to determine the spread of the melanoma to other parts of the body. Based on these results, the doctor decides whether additional treatment is necessary: removal of a second melanoma, immunotherapy, chemotherapy, etc.

A regular check-up by a dermatologist will be necessary afterwards.

Was this article helpful to you? Why don't you share your feelings with the community?
Take care!

Thank you for this informative article.

My husband has been under a Dermatologist for some time now and was diagnosed with Stage 1 Skin Cancer. Thank goodness  this was found early and he is still under treatment for malignant melanomas on his legs, knees and thighs. From removal under local anesthetic with stitches this has entailed numerous visits to both his Doctor and Dermatologist. He was also sent for testing of the prostate, but luckily no cancer of the prostate is yet  found. An MRI of the prostate is now being organised for early July.

From living in Zimbabwe and South Africa for over 60 years the outside temperature was often in the region of 26 - 35 degrees with high humidity, plenty of sunlight etc. which led to persistent skin damage.  Approximately 5 years' ago I had basal cell carcinomas removed from the nose/face and after being warned they may return, these are slowly forming once again. My Doctor is in the process of organizing consultations with the Dermatologist for removal.

I have very sensitive skin, am allergic to many facial/body creams, and react to many chemicals so mainly use hypoallergenic products, wear gloves for washing dishes as well as in the laundry. My mother is very allergic prone so this is obviously in my genes and always will be. I tend now to stay out of the sun also which is essential; I'm even allergic to Vitamin D!

Thank you for this very informative article. I would like to ask if any one has ever been diagnosed with cancer of the skin on your head in your hair. The reason I am asking is, that I can feel a tiny pimple on my scalp and it feels crusty, as if i want to pick it out with my nail. It is in a place where I can not see it, but my husband says its a black pimple like spot. it is not particularly itchy but I keep feeling it all the time and feel that the crustiness is increasing. Should i be worried/ has any one experienced this? Because of the lock out for the past nearly 5 months, I haven't been out, even to the doctors. If any one knows anything like that, I would be grateful if you could comment on this. Thank you