What is a genetic disorder?

To date, more than 8000 genetic disorders have been identified worldwide. In the UK, there are about 2.4 million people living with a genetic disorder. For the most part, these genetic diseases are rare and often little known. Their common characteristic is an anomaly at genome level (the set of genes), and unlike some diseases, they are not contagious.

What is a genetic disorder? What is a hereditary disease? How are they passed along? How are they diagnosed? What are some of the potential downsides of genetic screening? Let us explain everything in our article!

What is a genetic disorder?

A genetic disorder is an illness caused by an abnormality in a gene or DNA, or in a chromosome of a patient.

DNA (Deoxyribonucleic Acid) is an individual's biological identity and is identical in all the cells of our body (except for red blood cells). It is a molecule that carries an individual's genetic heritage. It exists in the form of strands coiled in a double helix and compacted into chromosomes. The human genome is thus divided into 46 chromosomes (22 pairs of 'autosomes' and one pair of sex chromosomes, 'X and Y'). A DNA sequence corresponds to a gene, which has a very precise location on a chromosome and determines a specific characteristic (such as eye or hair colour, for example). 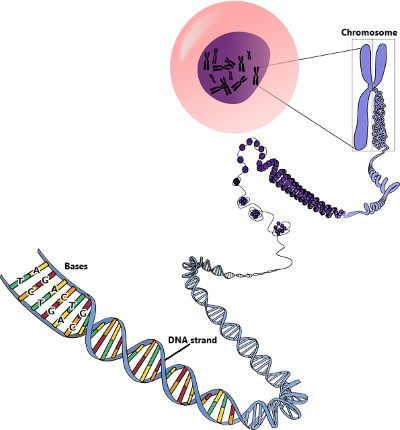 There are different types of genetic disorders:

It is important to know that a DNA anomaly or mutation does not always lead to a genetic disorder, these mutations can go unnoticed and ultimately contribute to genetic variability and diversity.

How are genetic disorders passed along?

The transmission of genetic disorders is conditioned. A genetic disorder is by definition written into an individual's genetic make-up and is passed on to descendants, but not systematically. In fact, the distribution of genetic characteristics during fertilisation is random, so for each pair of chromosomes, one chromosome comes from the mother and the other from the father. There are two types of inheritance patterns for non-sex chromosomes (autosomes): autosomal dominant inheritance and autosomal recessive inheritance.

In this case, an individual can carry the defective gene, but he or she may not express the disorder: a single copy of the gene is not enough for the condition to develop. A person who can pass on a copy of the gene to his or her offspring, but who has not developed the disorder, is called a "carrier". One needs to have two copies of the gene in order to develop the disease, meaning one copy from the mother and one from the father. 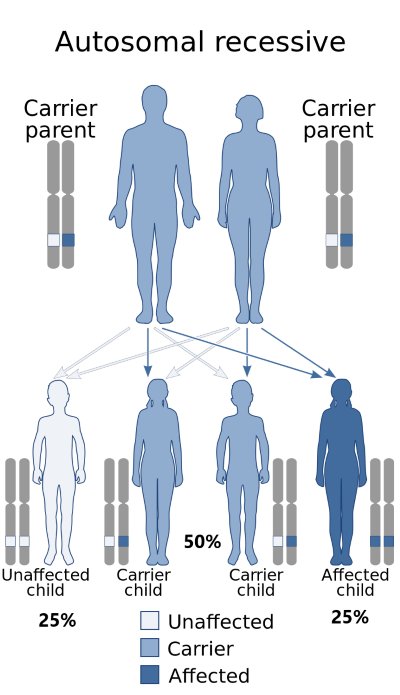 In this case, carrying the defective gene necessarily implies expressing the disorder: a single copy is sufficient for the disease to develop. An individual is "affected" and necessarily passes on a copy of the gene to his or her offspring. This means that either the father or the mother, or both, must be affected by the same disease for a person to be ill. 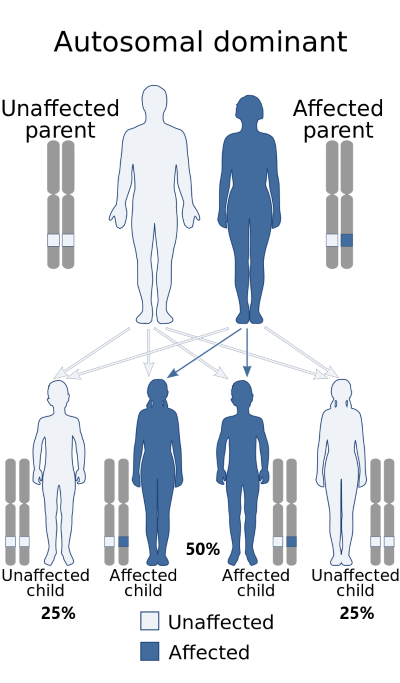 For example achondroplasia (a form of dwarfism), polydactylyism (having additional toes) and Huntingon's disease (a neurodegenerative disease) are autosomal dominant diseases.

Some diseases are passed along through the sex-chromosomes. These X-linked disorders affect men.

A little reminder: the male gender is characterised by a pair of X/Y sex chromosomes and the female gender is characterised by a pair of X/X sex chromosomes. Consequently, an anomaly on the X chromosome in men cannot be corrected as they only have one X chromosome. It should be noted that a father cannot pass this type of condition along to his son (he inevitably passes the Y chromosome along). Women can be healthy carriers because the defective copy of the recessive gene is counterbalanced by the 'healthy' copy on the other X chromosome.

Some genetic disorders are caused by "acquired" DNA mutations that are not inherited but occur spontaneously. One example of this are mutations that lead to cancer. These types of mutations, if they affect sex cells, can be passed on to descendants, which is why family health history is so important in making a medical diagnosis.

How are genetic disorders diagnosed?

Prenatal diagnosis (PND) for inherited conditions can be performed in the UK for couples and women at risk of having a baby with sickle cell disease or beta thalassaemia major. They are referred by healthcare professionals.

For certain genetic disorders, screening is systematic: for example, every pregnant woman in England is offered a screening test for Down's syndrome between 10 and 14 weeks of pregnancy. If the screening test shows a high chance of having a baby with Down's syndrome, women are offered diagnostic tests to find out for certain if the baby has the condition or not.

There is no routine antenatal screening for cystic fibrosis in the UK. However, an antenatal test is available for people who know they are at risk. Babies are screened around six days after they are born using a 'blood spot' or a newborn screening test.

The diagnosis or suspicion of a genetic disorder within a family may lead to what is known as genetic counselling. A genetic counsellor is a healthcare professional who helps patients draw a family tree to assess them and their partner's risk of passing on a genetic disorder to their offspring. He or she will also advise and guide patients through diagnosis and treatments.

Genetic counselling is directed in particular towards people at risk. It may be offered to couples who have experienced multiple miscarriages or stillbirths; to an individual with symptoms suggestive of a genetic disorder; or to families affected by specific genetic disorders such as cystic fibrosis, etc.

Certain cancers are linked to clear genetic mutations and their occurrence in families is a proven risk factor. This may prompt some patients to become aware of this mutation that predisposes them to cancer. One example of this is breast cancer, in which the BRCA gene mutation is implicated. Many patients who have been found to carry this mutation have chosen to undergo a preventive mastectomy, which prevents the cancer from developing.

What are some of the downsides to genetic testing?

Today, it is possible to have one's genetic make-up analysed by private companies, and for as little as a hundred pounds you can access a wealth of information: for example, you can trace the history of your ethnic origins, learn about any genetic predispositions you may have, your ability to metabolise coffee or to detect odours, etc.

It is important to keep in mind, that although independent genetic testing is permitted in the UK, it is a decision that should not be taken lightly. Genetic testing is an important medical tool and making these tests commonplace and available at the click of one's computer mouse can possibly lead to hypochondria and generate unnecessary anxiety. In addition, the question of data ownership is unavoidable: this information belongs as much to the past and present generations as to the future generations. Numerous questions have arisen, related to the storage of this data and third party access to it. These are subjects that we must continue to address in the future to strike a balance between technological advances and privacy.

Yes, the article was very interesting, particularly for me, as i am referred for a Genetic DNA and am awaiting an appointment. There is a strong History of Hypercholestraemia. My Father, his mother and his sister all died young with Coronary heart disease due to high Cholesterol. My Cholesterol is always high despite being on Staten. My Endocrinologist has referred me and I have been waiting for 10 months now. Some one told me he waited for 18 months before he got his appointment. If I am positive, the rest of my siblings will have to be tested as well. If any one in the group knows anything about this subject, I will be interested to know. Thank you

CDKL5 deficiency disorder: everything there is to know!