What is gene therapy?

Gene therapy is a therapeutic strategy that involves the introduction of genes into a patient's cells or tissues to treat a disease. Gene therapy is still in its infancy but initial results are encouraging.

So what does gene therapy entail? What are the different strategies of gene therapy? What types of illnesses can be treated by this method? What is the status of current clinical trials?

What does gene therapy entail?

Gene therapy was initially conceived as a therapeutic approach for monogenic diseases* by delivering a "healthy" gene to the cells capable of replacing the "sick" gene. So, gene therapy consists of modifying cells in order to prevent or cure a disease.

Nowadays, the methods and indications are much broader. 65% of current clinical trials involve the treatment of various cancers.

*Monogenic diseases are the result of a mutation that affects a single gene. One such disease is cystic fibrosis.

Each human being is made up of more than 70,000 billion cells. Each of these cells contains 23 pairs of chromosomes, each of which consists of a double-helix filament: DNA. The DNA, in turn, is divided into a few thousand portions: the genes. We have about 25,000 genes that make up our genome. This is the unique genetic heritage passed on by both parents. It contains all the information necessary for the body to develop and function properly. These genes tell each cell what role it has to play in the body.

DNA is composed of 4 nitrogenous bases which are analysed by an enzyme: RNA polymerase. The role of RNA is to enable the production of proteins, each of which has a very specific function in the body.

If there is a modification in the sequence of a gene, the production of the protein is altered. Depending on the gene affected, the individual may be affected by various health conditions such as cancer, muscular dystrophy or cystic fibrosis.

The aim of gene therapy is therefore to provide, with the help of a therapeutic gene, a functional code so that the cells can produce the missing protein.

What are the different gene therapy strategies?

This involves importing a copy of a "healthy" gene into a target cell, so that it can produce the protein necessary for the body to function properly. The gene is delivered by a vector.

This strategy makes it possible to treat monogenic diseases. The imported gene will not alter the malfunctioning gene, it is added to the genetic heritage of the cells to compensate for the deficient function.

This can be done: 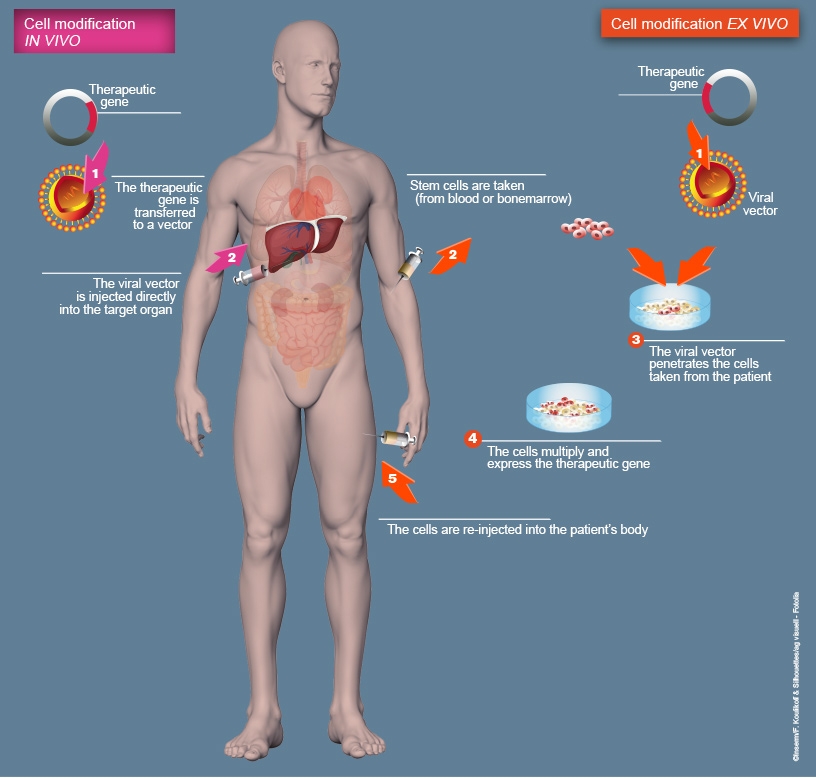 RNA modification consists of having the cell produce a modified version of the non-functional protein. An injection of small antisense oligonucleotides* is given. They will then bind to the messenger RNA transcribed from the mutated gene and modify its splicing**.

**Splicing is a process in which the RNA transcribed from genomic DNA can undergo cutting and binding steps that lead to the elimination of certain sections in the final RNA.

Genome editing: repairing or deleting the impaired gene directly in the cell

Genomic editing allows targeted repair of genetic mutations to occur. For this technique, several tools need to be imported into the cell:

These tools also include zinc-finger nucleases, TALEN* and CRISPR**.

These three approaches are still at the experimental stage. Several clinical trials are underway in China and the United States, but the simplicity of the CRISPR system has inspired much hope.

*TALEN (Transcription activator-like effector nucleases) are restriction enzymes capable of cutting a strand of DNA at a specific sequence.

These are viruses, called oncolytic viruses, that are genetically modified to infect and destroy tumour cells.

Some complex conditions cannot be treated by repairing or replacing a single gene. However, it is possible to design indirect strategies combining gene therapy and cell therapy*. It is thus possible to obtain cells with new therapeutic properties.

*Cell therapy consists of transplanting cells to restore the function of a tissue or organ.

What types of illnesses can be treated with gene therapy?

Many conditions are the subject of gene therapy research, including:

What is the status of current clinical trials related to gene therapy?

The majority of clinical trials related to gene therapy are still in phase 1 or 2 of research, but a few have already led to a market launch such as:

As much as I would like to help you, I am a cancer Patient, so don't think I would be of any use to you

I find this really interesting

The gut-brain connection: What is it and how does it work?

COVID-19 vaccine: What do you think?

COVID booster vaccine: What do you think?

Fibromyalgia: How to talk to your doctors?

Treatments for myasthenia gravis: Are there any side effects?

Breast cancer: How to deal with the anxiety of waiting for test results?