Five million people worldwide are estimated to be affected by IBD. No single cause has been identified for IBD, so treatment remains focused on easing symptoms - symptoms that have a significant impact on Carenity members' daily lives.

When and how were these diseases diagnosed for Carenity members? What are the symptoms? What is their impact?

We conducted a survey in the United Kingdom, the United States and France to gather the opinions and feelings of Carenity members!

Discover their responses below!

95 members participated in our survey in the United Kingdom, United States, and France

60% of respondents are living with Crohn's disease and 40% with ulcerative colitis. 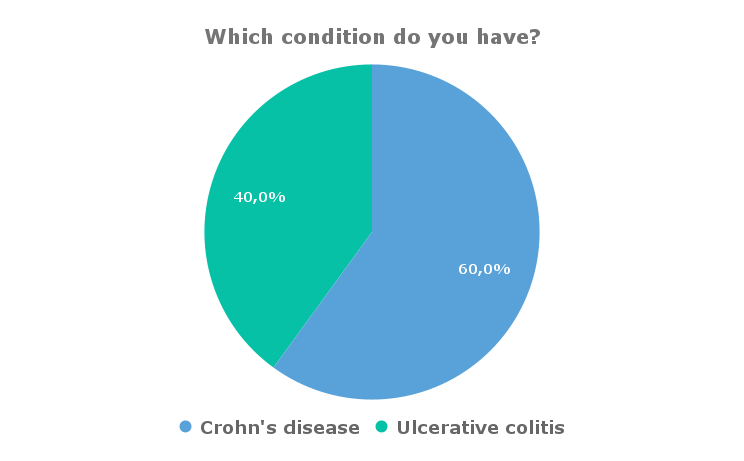 The majority of members surveyed, or 52%, were diagnosed more than 10 years ago: 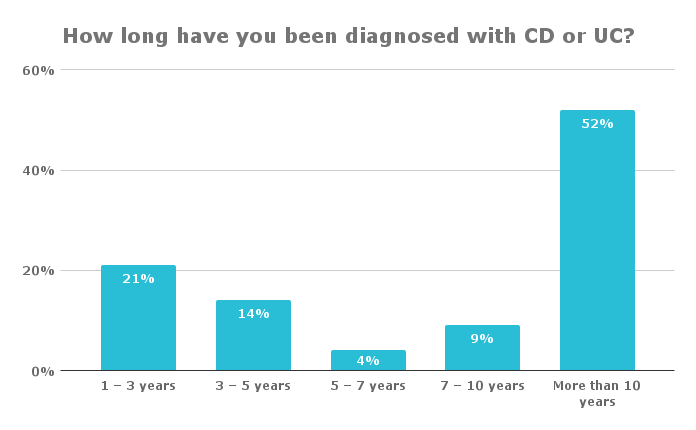 Similarly, most members, or 52%, were diagnosed between the ages of 20 and 39 years old: 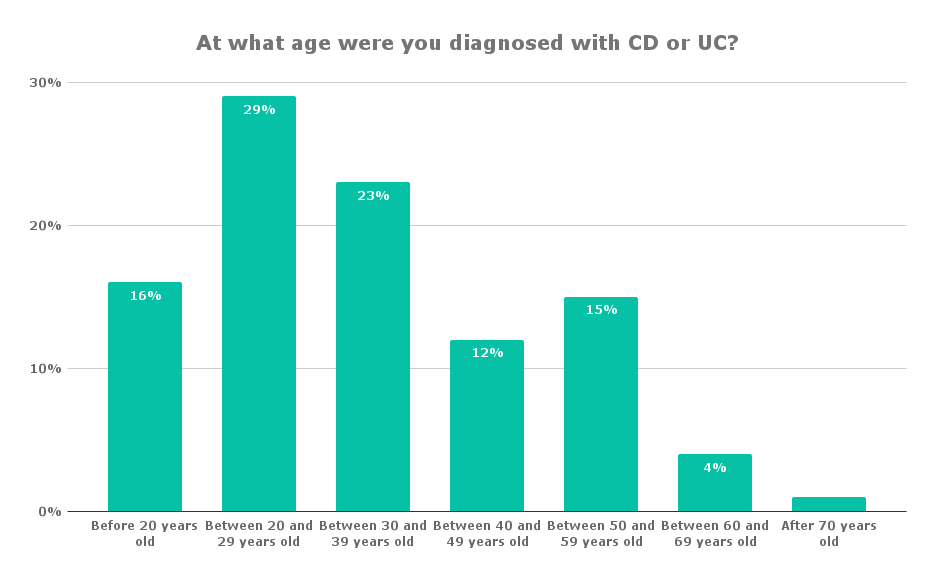 Nevertheless, according to the Crohn's & Colitis Foundation, a large proportion of IBD diagnoses are made between the ages of 15 and 35. In the United States, for example, the Foundation estimates that as many as 70,000 new cases of IBD are diagnosed each year, and around 5% of these cases are of paediatric age (<20 years old).

On average, members surveyed experience 3 digestive symptoms. The most common symptoms experienced are diarrhoea, abdominal pain and blood or mucus in the stool. 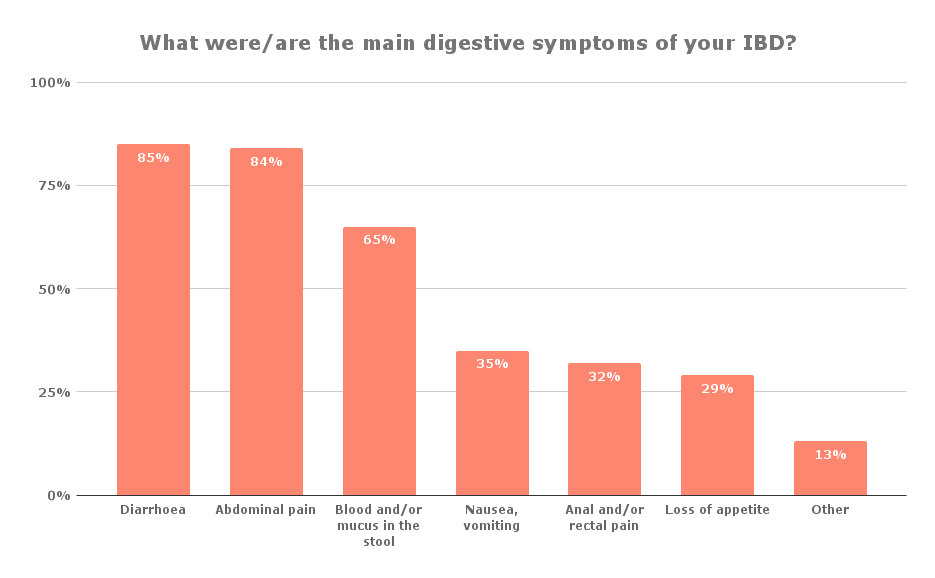 Carenity members responded that in addition to digestive symptoms, they experience an average of 3 more, the majority being affected by fatigue, 92%, as well as joint pain, 62%, and weight loss, 48%. 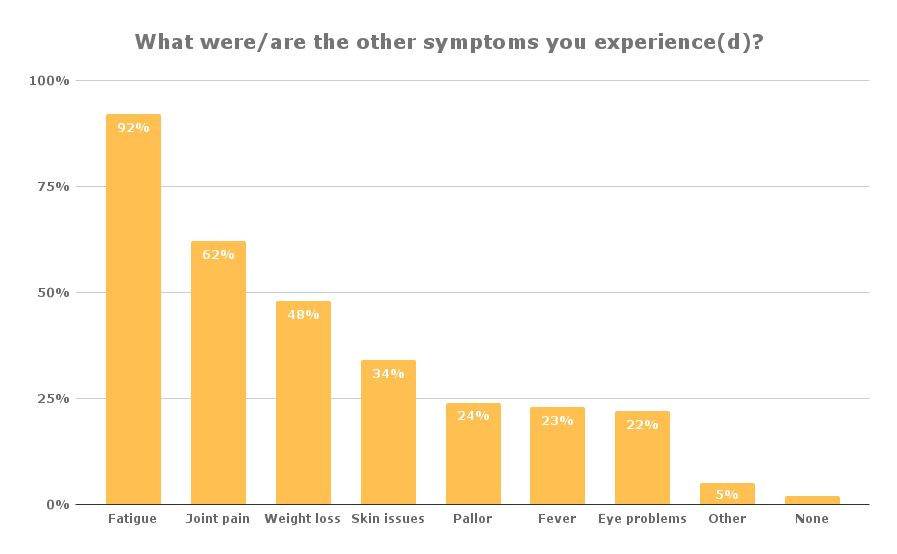 The parts of the body affected by Crohn's disease are the different segments of the digestive tract, from the mouth to the anus. Ulcerative colitis affects the rectum and the colon.

The Carenity members surveyed mentioned experiencing at least one of the following consequences of IBD: 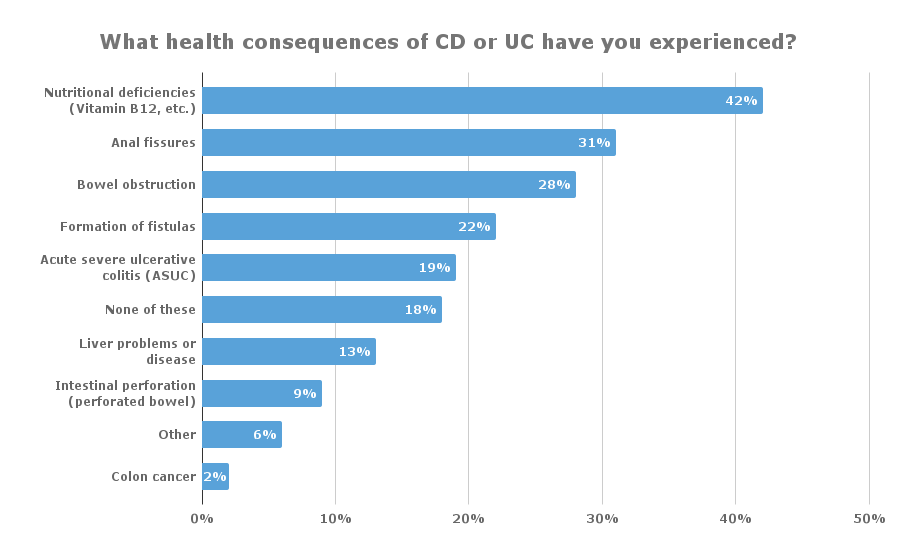 We asked Carenity members about the impact of Crohn's disease and ulcerative colitis on their daily lives. The symptoms have a significant impact on patients' lives and well-being. Here are the aspects of daily lives that members see most impacted:

Impact on leisure time and hobbies – 53%

We also asked them what they find most frustrating or burdensome in their daily lives:

74% of respondents are bothered mainly by the frequent need to use the toilet, then for 72% of the members surveyed, it is the chronic nature, unpredictability, and complications of their IBD.

40% troubled by the fact that they must limit or stop certain activities outside the home, 36% are bothered by the treatments, their side effects, and any hospitalisations they've experienced.

23% are frustrated by the diet they have to follow because of their IBD, while only 14% are bothered by the way others look at them.

Crohn's disease and ulcerative colitis are two incurable conditions, which is why they are called chronic. Drug treatments are prescribed to alleviate the symptoms and in the most severe cases, surgery is performed to relieve its effects.

Doctors recommend a number of dietary and lifestyle guidelines such as physical activity and a balanced diet to improve comfort and especially digestion.

We asked members what steps they have taken in addition to their medical treatment to manage or cope with IBD: 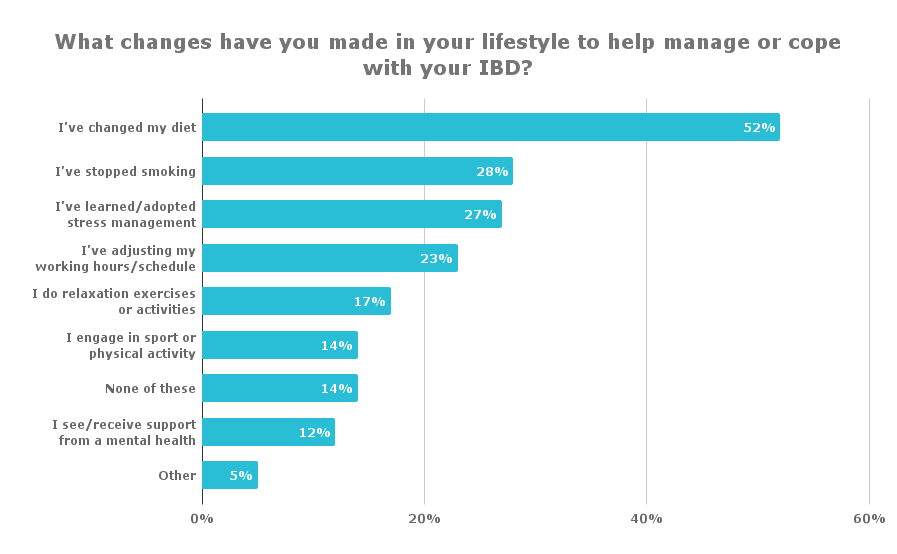 More than half of the members who responded to the survey, or 52%, indicated that they had changed their diet, and fewer than a third, or 28%, have stopped smoking, though it is likely that the remaining members had not been smokers previously. Finally, around quarter of respondents have learned stress management and have adjusted their working schedule. However, 14% of survey participants have not changed anything about their daily habits and routine.

Where is IBD research today?

IBD has a major impact on quality of life; its impact on daily life, mood, personal and professional activities, among others, is significant. In addition, the symptoms make these two diseases somewhat taboo or hard to talk about. Nevertheless, solutions do exist, and even if the treatments are not curative, in the vast majority of cases, lasting control of the disease is possible.

Scientific teams at INSERM in France are interested in the role of food, particularly the impact of certain food additives such as emulsifiers, in the inflammation of the intestine associated with these diseases.

Nowadays, research is focused on developing more specific treatments that would generate fewer side effects than existing treatments.

In the case of surgery for more advanced cases, doctors are developing new approach techniques that are less invasive for patients. For example, laparoscopic surgery (via an incision below the navel).

Faecal transplantation is also being studied as one of the solutions for treating IBD. This would consist of introducing the faeces of a healthy person, with good intestinal bacteria, into the digestive tract of a patient in order to reconstitute his or her intestinal flora and help him or her fight against the disease. For the moment, success is relative, and the remission observed in these patients is only temporary.

Was this article helpful to you?
Give it a like or share your thoughts and questions with the community in the comments below!
Take care!

Claudia is a content creator at Carenity, specialised in health writing.

Claudia has an MBA in Sales and Marketing Management and is continuing to develop her skills in digital marketing. On the personal side,... >> Learn more

What are the alternative and complementary therapies for IBD?

How does Crohn's disease affect your mental health? How do you cope?

My treatment has been delayed because of the Coronavirus - What can I do?

UC: Diagnosis and depression, how to live with it?

What is the most frustrating or difficult aspect of living with Crohn's disease?

How do you manage the chronic fatigue caused by your UC?