Damien of Carenity's thesis: plasticity, or when the brain reeducates itself

Data Scientist at Carenity, Damien is also the author of a thesis on brain plasticity, i.e. the mechanisms by which the brain is able to modify itself during a learning phase. He worked particularly on the brain's ability to re-educate one of the eyes after a certain age, by studying the binocular visual cortex in mice. He talks about his research and the opportunities that recent discoveries have opened up for the treatment of chronic diseases.

Hello Damien, when did you arrive at Carenity and what is your role here?

Hello Louise, I arrived at Carenity in February 2019 following my thesis. Within Carenity, I am part of the Data Science team. We strive to be the voice of the patient through the development of questionnaires, the analysis of responses and the publication of results as accurately as possible to the stakeholders in the health system. 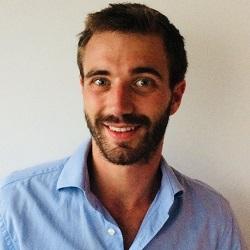 Your thesis in neuroscience focuses on the plasticity of the brain. Can you explain to us what plasticity is and how it evolves during our lives?

Plasticity is the ability of the brain to be modified as a result of a change in environment. During our development, there are precise time windows with high plasticity (called critical periods). These critical periods are learning windows spread out during development. We do not learn everything at the same time: it is first our primary sensory areas (sight, hearing, hearing...) that are plastic, then the cortex areas corresponding to locomotion, languages and finally higher cognitive areas (for more information see Hensch et al., 2005). Once adult, all these critical periods are over, and the adult cortex is not very malleable (Figure 1). This plasticity allows us to explain that it is easier to learn to walk or speak a new language when you are young than when you are an adult.

A brain that is too plastic or, on the contrary, too little plastic would be the cause of some diseases. Can you tell us more about it?

It is a good thing that the adult cortex is no longer plastic, it allows us to memorize what has been learned. Indeed, if our brains were still plastic, we would not be able to keep the information we learned, which would look like Alzheimer symptoms. For example, I learned to ride a bike when I was young (during a critical period) but I haven't ridden a bike in 2 years. However, today, I could ride a bike again without any problem because this information has been recorded.
There are some diseases that can be due to a critical bad period (too short or too long) or due to poor learning during this period (not the right stimuli). This is particularly the case for amblyopia, for which the eye afferences to the binocular visual cortex are not optimal. In these cases, it would be interesting to be able to reopen a window of plasticity in adults in time so that we can learn later what has been poorly learned. Similarly, rehabilitation after a stroke could be facilitated by reopening the critical period by removing this barrier to learning.

Your thesis focuses on the visual cortex, where a window of plasticity in children teaches both eyes to connect to the right place in the visual cortex. When this has been poorly learned, we speak of amblyopia, or "lazy eye" syndrome, i.e. a difference in visual acuity between the eyes. On what precise point did you study this phenomenon?

What is known about the functioning of visual plasticity in mice?

The first studies on critical periods were carried out on the visual cortex. These studies have highlighted the biological mechanisms that explain the opening and closing of the critical period. Among all these factors, it has been shown that the concentration of a certain molecule (called Otx2) controls the opening and closing of the critical period (plasticity window). What is interesting is that this molecule is not produced by the cells of the visual cortex but is produced by the cerebrospinal fluid (produced by the choroid plexus). Thus, Otx2 recognizes the cells that control this plasticity thanks to the extracellular matrix that surrounds these cells, and in particular a "sugar" of this matrix.

A critical period model is now accepted with two thresholds of Otx2 accumulation in these cells that control the plasticity of the visual cortex. From a first Otx2 accumulation threshold, the critical period is opened (in blue Figure 2). Otx2 continues to accumulate up to a second threshold that closes this window of plasticity. What is essential is the fact that Otx2 must continue to accumulate in adults to maintain the non-plastic state of this cortex (Figure 2). 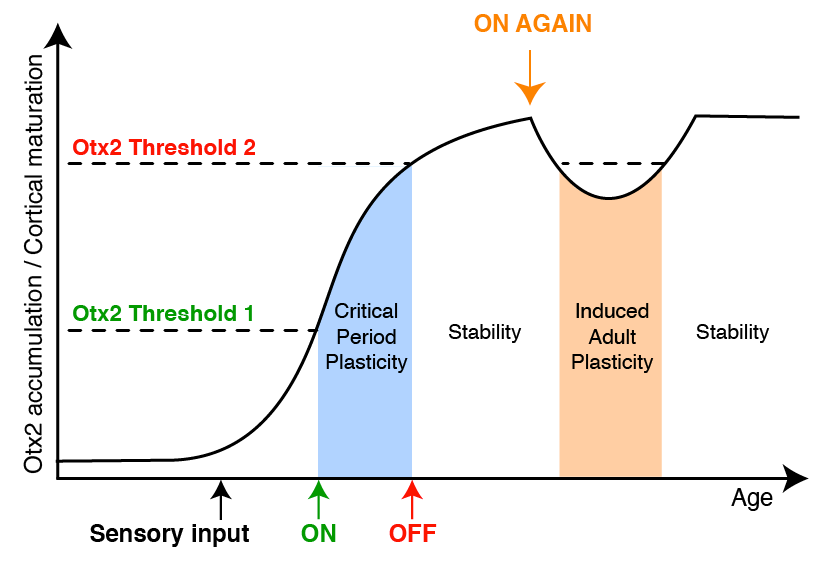 How can we use this mechanism to open a new plasticity window later on?

Since Otx2 must continue to accumulate in its target cells in adults to maintain the non-plastic state, if we decrease the amount of Otx2 that achieves it, we can fall below the second threshold of Otx2 accumulation and thus reopen a plasticity window (Figure 2). There are different ways to reduce this amount of Otx2. During my thesis, I was more interested in Otx2's interaction with the "sugar" it recognizes. Thus, if we inject these sugars into the cortex, Otx2 attaches itself to it and no longer accumulates in the cells that control plasticity, which reduces the amount of Otx2 and thus a reopening of plasticity. It is difficult to achieve this, because this precise sugar is difficult to extract and synthesize (almost a year of synthesis). Thus, with the help of chemists, we characterised an easily synthesized compound (1 week of synthesis) that mimics the sugar that Otx2 recognizes. The injection of this compound into the mouse cortex allowed Otx2 to be deceived and interacted with it. Thus, less Otx2 is available for cortex cells, which reopens a window of plasticity in adults. This innovative molecule was patented during my thesis.

What prospects does this patent open up for medical research? What are the next steps?

This patent has many perspectives, both for medical research and for fundamental research. Indeed, succeeding in mimicking sugars thanks to a quick and easy synthesis will make it possible to study more precisely the physiological roles of these sugars. Of course, this discovery is the first step in a long journey to find the optimal formulation for the interaction of these mimes with proteins that have an important physiological role.

In the long run, will other cortexes be able to be adjusted in this way, in the same way as vision?

The role of Otx2 in plasticity was first characterised in the visual cortex. Since Otx2 is secreted by the choroid plexus in the spinal cerebral fluid, we find Otx2 in several different cortexes (Figure 3). Therefore, its role in other cortexes has been studied and these studies have shown that it has a similar role in two other cortexes (auditory and piriform). It would thus be possible for Otx2 to control many critical periods during the development of our brain (for more information Di Nardo et al., 2018).

Many thanks to Damien for sharing his research with us!
Have you ever heard of brain plasticity?
Do you have any questions or comments?

Very interesting article. No, I have never heard of Brain Plasticity before. i have seen children with an eye patch to cover the who have lazy eye, but did not know any more than that. I understand it better now. Thank you for this interesting article.

What an interesting research I too have not heard of brain plasticity before. What hope this research could bring to children and young people in particular. Also the times in adulthood when there could be windows of opportunity for ‘sugars’ to aid improve to eye conditions.  Would this research also aid those children who developed juvenile macular dystrophy ?  I have a personal interest in this as my son developed this awful condition as a 7 year old. I’m aware that there has been good progress for some who have macular degeneration but that is dependent upon which type you have.

Thank you for sharing this interesting research please keep us informed of further developments.

Yes i understand the plasticity about eyes. And it has affected me in my childhood.

Nicholas Carr's book The Shallows mentions neural plasticity a lot but the idea of a critical period is new to me.

Does your research imply that controlling blood sugar will reduce plasticity?