The flu epidemic in the UK occurs every year during autumn and winter. According to the University of Oxford's Vaccine Knowledge Project, it is estimated that on average, 600 people die from complications of flu each year, though in some years this number can rise to over 10,000. Fortunately, there is a way to prevent it: vaccination.

Indeed, the vaccination programme for the 2020-2021 season began on 1 September 2020 and will extend into November and December across the UK. During the first few months, the most vulnerable among us are called upon to be vaccinated as a priority.

We'll tell you all about it in our article!

How does vaccination work?

From a historical point of view, the idea of preventing diseases has been around for centuries. We've come a long way from the smallpox inoculation by Edward Jenner in the 18th and 19th centuries or Louis Pasteur's first rabies vaccine. Today, vaccination has become a major public health solution: thanks to vaccination, 2 to 3 million lives are saved worldwide each year according to the WHO.

Generally speaking, fighting an infection is a two-step process. Faced with a warning signal, such as the presence of an infectious agent (which may be a foreign element or the flu virus), the immune system puts in place:

The start of these two successive phases is slow, and often allows time for the infectious agent to cause illness.

Vaccination involves preparing the body to defend itself against the infectious agent. It consists of the preventive introduction of harmless copies of the infectious agent into a healthy (not yet infected) individual. These copies are said to be harmless because they are able to stimulate the immune system without causing disease. For example, in the case of the flu virus, an inactive fragment of the virus is added to the vaccine.

But what is the seasonal flu exactly?

Seasonal influenza is an acute respiratory infection caused by the Influenza virus of the Orthomyxoviridae family. It mainly affects the upper respiratory tract (nose, throat, bronchial tubes) and more rarely the lungs. Symptoms are grouped under what is known as an influenza-like illness (ILI) or "flu-like syndrome", i.e. aches and pains, high fever, respiratory signs (dry cough and runny nose), intense fatigue and headaches.

Note: Be careful not to confuse the flu with ILI. Flu-like syndrome is a set of symptoms that can be caused by viruses other than the Influenza virus. You can have flu symptoms without actually having the flu.

The incubation period for the flu can be up to two days, meaning that symptoms can appear up to 48 hours after infection and can persist for up to two weeks. An infected person is contagious up to five days after the first symptoms appear (note that this can last for up to seven days in children).

There are three types of Influenza virus that infect humans: types A, B and C. Only types A and B are responsible for seasonal epidemics. 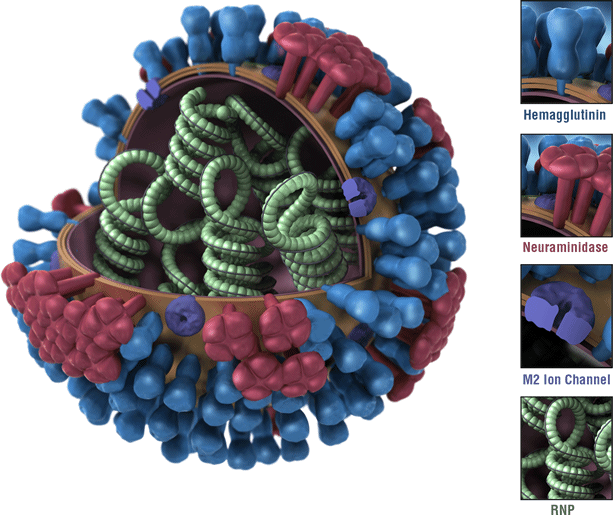 In fact, the surface of the virus is covered with surface proteins: neuraminidase (N) and haemagglutinin (H). There are several versions of these proteins, from H1 to Hx and N1 to Nx. Depending on the combination of these proteins, the subtypes will be identified as HxNy.

For example, the "H1N1" virus responsible for the 2009 pandemic refers to a type A virus, whose haemagglutinin is type 1 and the neuraminidase is also type 1.

The main characteristic of these viruses is their great genetic variability: they mutate and transform over time as they infect people. This means that every year a new form of virus appears. This is why a new flu has to be fought every year, which thus explains the need to get vaccinated every year before the flu season.

The World Health Organisation is responsible for determining, a few months before the flu season, which strains (i.e. subtypes of the virus) are most likely to circulate and should be included in the vaccine.

Why get vaccinated against seasonal flu?

Seasonal flu is generally considered to be a low-risk illness, especially in young, healthy people. However, it is important to know that influenza can be serious or even fatal in some patients and that there are some people at risk. That is to say: the elderly, pregnant women, infants, obese patients or people with chronic conditions.

Getting vaccinated has a benefit on an individual level but also on a collective level. Indeed, by getting vaccinated we reduce the number of people likely to spread the virus. It protects the most vulnerable and reduces the risk of serious complications or death. It should be noted that although it is hard to estimate how many deaths are prevented by the flu vaccine, researchers in the United States estimated that flu jabs prevented 7 million illnesses and 8,000 deaths in the US last year.

The NHS recommends and is offering vaccination against influenza for:

To learn more, you can find the complete list of people at risk: NHS: Flu vaccine.

Health officials in Scotland, Northern Ireland and Wales are planning to cover similar groups. Later in the year, the vaccine may be given to people aged 50-64, but the NHS says that anyone in that age group or in an at-risk group should try to get vaccinated as soon as possible.

You should know that you are protected about two weeks after being vaccinated against the flu. It is therefore recommended that you get vaccinated every year in the fall to be protected during the winter.

It is not too late to get the seasonal flu shot for those who are behind schedule. Even if the virus is already circulating, getting vaccinated against the flu helps protect yourself and others, reduces the spread of the virus, and therefore reduces the serious forms of seasonal flu, some of which are fatal in the most vulnerable people.

Can I get the flu from being vaccinated?

Before each flu season, the WHO is responsible for giving recommendations on the 3 or 4 main strains to include in the composition of vaccines. To do this, the WHO has a global surveillance and alert system to detect circulating strains of viruses. The strains circulating in humans are particularly monitored, making it possible to update the composition of vaccines twice a year. Despite this, influenza remains unpredictable, as the occurrence of an unexpected strain that is not integrated into the vaccine can reduce the effectiveness of the vaccine. The closer the chosen virus strains are to the circulating strains, the more effective the vaccine will be.

As a result, a vaccinated individual may not be fully protected. If the type of virus chosen in the composition of the vaccine is too far removed from the circulating type of virus, the vaccine will not be completely effective. This means that even a "prepared" immune system may have more difficulty recognising a virus that has suddenly mutated. In addition, it is important to know that the protection provided by the vaccine diminishes over time.

Furthermore, it is impossible for the vaccine to cause flu in a healthy individual. In fact, the vaccine contains only an inactive copy of the virus, which is non-infectious.

This year the vaccines available for the national influenza immunisation programme 2020-2021 and in accordance with WHO recommendations, the 2020 influenza vaccines are composed of the following virus strains:

To understand the nomenclature of viral strains decided by the WHO, here are a few pointers. Let's take one of the virus strains present in the current vaccine: A/Guangdong-Maonan/SWL1536/2019/H1N1pdm09.

This year, the following flu vaccines are available for the 2020-2021 vaccination campaign and are covered by the NHS for people at risk of severe flu: FluenzTetra® from 24 months to less than 18 years of age, FluarixTetra® from 6 months, InfluvacTetra® from 3 years, Quadrivalent Influvac® from 3 years, FlucelvaxTetra® from 9 years and a few others. For the complete list: National flu immunisation programme 2020/21

How much does the flu jab cost?

The flu jab is available for free on the NHS if you fall into one of the eligible categories (Full list of those considered eligible and at riskhere). If you do not fall into one of those categories but would still like to be vaccinated, you can do so privately at various pharmacies and supermarkets such as Lloyds Pharmacy (for £12.99), Boots (for £13.99, though bookings are temporary suspended for those under 65), Superdrug (for £12.99), Asda (for £8.00) and Tesco (£9.00).

Are adjuvants dangerous? What are they for?

In the composition of a vaccine, we often find the term adjuvants. An adjuvant is an ingredient used in some vaccines that helps create a stronger innate immune response, which is essential to activate immune memory, upon which the principle of vaccines is based.

Adjuvants are used, for example, to reduce the number of injections and to strengthen the response in weak responders (the elderly or immunocompromised people, etc.). These adjuvants are used in particular for vaccines that are not live or whose infectious agent is inactivated, as is the case for influenza.

It should be noted that if certain vaccines do not need adjuvants, it is because they are capable of inducing a sufficient innate immune response: in this case, they are said to be immunogenic.

Aluminium salts are the most widely used adjuvants, given the data in favour of their safety, with more than 90 years of use and hundreds of millions of doses injected, according to the ANSM (the French National Agency for the Safety of Medicines).

Other adjuvants are developed when aluminium is not effective, as is the case with the flu vaccine. These include squalene, bacterial derivatives or artificial vesicles called liposomes.

What are the possible side effects of the flu vaccine?

Getting a flu shot will not infect you with the flu, remembering that the infectious agent is inactive and therefore unable to make you sick with the flu.

In addition, a few undesirable effects are reported, which are often benign:

For more information, you can consult the NHS website.

Finally, here are some encouraging statistics...

According to the WHO, vaccination saves 2 million lives every year worldwide!

The important thing to remember is that the influenza virus is a very particular virus, capable of mutating and transforming itself over the years. This is why, every year, vaccination against seasonal flu is a real public health challenge.

Getting vaccinated is like wearing a mask during a health crisis; you protect yourself, but above all you protect others.

Was this article helpful to you?

Share your thoughts and questions with the community in the comments below!

Why is this article on Carenity? Very patronising. Quite often those of us with underlying conditions are knowledgeable and want facts , not propaganda.

@Johnniejive Hello Johnniejive, thank you for your feedback on our article. At Carenity we aim to provide quality, fact-based content that is relevant to our all members, regardless of their chronic condition, so your comments and feedback are important to us. I'm sorry you feel we've missed the mark on this one, hopefully our next article will meet your standards!