This can only be described as eventful and deeply interesting. A story about overcoming every single obstacle you can imagine to continue living life at its fullest and having the energy to try and conquer the world.

My story is long and somewhat eventful.  Throughout it all though, I have tried for the most part, to keep a positive attitude and not be a victim.  It is hard sometimes, when life seems to deal you blow after blow and when others around you seem to sail through life with no problems whatsoever.  I never actually subscribed to the ‘there is always someone worse off than you’ scenario as a means of feeling better.  Why should the fact that some poor blighter is having a worse time of it than I am cheer me up?  What I do have going for me, is that I absolutely refuse to be beaten – I won’t let life and what it throws at me get me down.  I am definitely a ‘glass half full person’, sometimes irritatingly so I am sure. 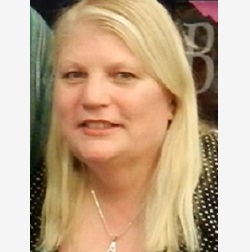 My story begins when at 4 years old, I was rushed into hospital.  I can’t remember this at all, but apparently I had lost use in one side of my body, my vision and speech were affected, and my mother was terrified.   I recovered under my own steam and I was sent home without any diagnosis. This happened several times throughout my childhood, each time some dreadful disease being suspected, often meningitis.

At the age of 16 my family moved to Oxfordshire and a year later, another attack saw me admitted first to the Radcliffe Infirmary and then to outpatients via the Churchill hospital, where I attended a Migraine clinic.  I had a diagnosis at last, Hemiplegic Migraine!  A person with Hemiplegic Migraine will experience a temporary weakness on one side of their body as part of their migraine attack. This can involve the face, arm or leg and be accompanied by numbness, or pins and needles. The person may experience speech difficulties, vision problems or confusion – in my case, all of the above!  I have never been known to do things by halves! This diagnosis was in1970 and from then I was prescribed meds which helped control it.

After the birth of my first child in 1977, the Hemiplegic Migraine stopped dead in its tracks!  I never had another attack.  I still had the occasional, what I now termed ‘ordinary migraine’, but no more of the type where I looked as if I had suffered a stroke!  Having a baby might not be the easiest cure for some, particularly men, but it worked for me!

I had my second child in 1978 and he was premature by 4 weeks, something happened with the afterbirth which caused me to develop lots of pelvic infection and inflammation in the following months.  There followed two years of ‘women’s problems’, back and forth to the gynaecologist, various scrapes and mini ops.  In the middle of all this, mum died in September 1979.  The gynaecologist finally announced I might as well have a hysterectomy and be done with it if I didn’t intend to have further children.  His reasoning was then I could get on with my life and family, rather than limping through till my 40’s with troublesome problems only to have it done then anyway.  This was in 1981 and I was just twenty-eight years old. I try very hard NEVER to say ‘why me?’ but I was beginning to think this was divine retribution for some sin or other!  Maybe I killed a pope in a past life!

I eventually bounced back again however, but the experience left me with a real tendency to urinary tract infections.  For years I would get two a month, sometimes more.  Over time I developed allergies to most of the antibiotics, Septrin causing a particularly nasty one, which killed the friendly bacteria that lives on the tongue and keeps the fungi down.  My tongue turned black and so revolting that if I stuck it out to look in the mirror, I really didn’t want to put it back in my mouth! I was eventually down to only one antibiotic that I could tolerate, which would work on the infection I kept getting.  As the prosthetic urita does not have the same protection for the kidney that the real one does, it had been stressed to me that if I had any signs of kidney infection I should get myself treatment immediately. Hmm, I thought, with only one antibiotic that might work???  Better take matters into my own hands here, so I started taking Cranberry extract, which has worked wonderfully well for me and I only get infections very occasionally now and haven’t taken the antibiotics for ages, well not for this at any rate.

I actually managed a reasonably healthy 1982, then had a serious car accident in 1983, and broke my spine.  I needed two spinal decompressions six months apart, where they removed the damaged discs that were compressing the spinal cord, and my mobility was seriously compromised. It was while I was in hospital after the first of these operations that I noticed a problem with my nails.  This was the first sign of Psoriasis, which it was believed was brought on by the trauma of the accident. The journey from that to 1992 was long and arduous. I took a look at life, realised I was thirty-nine approaching forty, and that if I followed in my father's families footsteps for living to their nineties,  effectively I could live as long again - did I really want to live the life I was living at that time?

From 1995 until 2000, although my disabilities and pain levels continued to plague me, I had two different jobs, and moved home four times!  I have hundreds of books and my poor long suffering sons helped me pack and unpack all these four times over, as well as DIY moving as I could never afford removals.

In 2000, two DVT's in a year, plus a couple of serious falls and I was back in the benefit system again.  One fall had injured my spine again and I was struggling with my mobility, which had never returned to full capacity in the first place.  This was the year I started a new relationship and moved with my new partner to live aboard a converted Scottish fishing boat called Quiet Waters.  In 2002, the boat was involved in an accident.  I emerged from this with two strained ankles, and injury to my neck, left shoulder and arm adding more pain to the daily back and neck pain from the original RTA!

In 2004, I dislocated my knee, which was in plaster from hip to ankle and in 2005, I had another fall taking a huge chunk out of one shin which needed to be filled in with silicone bead dressings.

2009 threw me a curve ball in the shape of two Melanomas needing to be removed, one cancerous and the other pre-cancerous.  The cancerous one was on my left cheek.  True to my usual style, the day after the stitches were removed, the wound burst open in the night.  I woke up to a ‘wet’ feeling, switched the light on and the pillow was covered with blood.  I ended up in the Maxillofacial unit, having the best job of reconstruction and re-stitching they could manage. The second one, the pre-cancerous one, was just above the left breast. Once again, it split after the stitches were removed, even though they were left in longer this time.

In September 2010 I married again.  My husband suffers from Depression, Anxiety Disorder and Borderline Personality disorder, COPD, Type 1 Diabetes, and it now appears he may have Myasthenia Gravis, a muscle wasting disease. He is the sweetest, most wonderful man but tormented with these black holes called Depression, which he disappears into at times.

I continued my business right up until May this year, becoming quite a recognised 'brand' in the MBS show circuit, and enjoying every minute.  I had a real interest in this area having tried many complementary/alternative therapies and treatments in my long journey, and finding as much relief and help from them as from a lot of prescribed meds, and without the side effects!

In these 15 years I have met some wonderful people and heard some amazing stories of hope and love, stories of challenges faced and overcome, so I have lots of wonderful memories.  I had hoped to continue till retirement in February next year, but in May this year (2015) suffered a heart problem and hospital admission.

I now have an added diagnosis of Angina and Hypertension to go along with everything else.  My levels of pain from the osteoarthritis, the Psoriatic Arthritis, Spinal Curvature (Lordosis, Kyphosis and Scoliosis) and back and leg problems are considerable.  I now have a new problem with facial pain, which is currently awaiting an ‘official’ diagnosis, but is either Trigeminal Neuralgia or Trimandibular Joint Disorder.  This finally tipped the balance and I had to admit I had reached the point where it was all just a bit too much.  I had to admit defeat and wind up the business.  The facial pain had started in 2012 with just the occasional attack at first.  The attacks were happening two or three times daily by this point and just added to the overload.

After so many difficult, hectic, busy and demanding years, I now find myself with a bit of a void in life.  Determined not to sit and vegetate, I found this site when I was Googling for information on a Psoriasis flare up probably caused by Beta Blockers or Statins prescribed in March, and think I have found a new outlet.

I intend to be very active on here and hope some of my stories, trials and triumphs and general 'glass half full' approach might help others through some difficult times.

This epic post has shown personal resilience, and the need to try and keep going, this has shown strong resolve from @Suncatcher2015 all I can say is wel done to you.

Thats some read,you needed to get that on paper

Keep on keeping on

Thanks @Karen56  and @pastij  - @roselilly , Gilda said exactly the same thing.  It has been said before, but I never think it would be of interest to anyone.  I must admit, it was very therapeutic actually writing it all down for once, even if I ended up feeling a little like the bullseye in the middle of a target!!!! :)  It was qite sobering to see it all in chronological order like that.

Mary Joseph, a well known authoress of the 70's did exactly that and her books were remarkable and gave people who suffered with rheumatoid arthritis a real boost in confidence.  I became addicted to her books, but unfortunately she passed away and her books seemed to disappear from the library shelves.  With her condition she was very prone to flare-ups and documented all her treatments at the same time as her family life.  I'm sure you could do this as well and give some hope to people in a similar situation as yourself. Reading your story has made me realise that although I am in pain, most of the time, there is much I could achieve through determination, just like you.

9 people reacted to this article. What do you think about that? Join the community!

Bone spurs: do you get them and where?

What is your most difficult task with osteoarthritis?

What to do about osteoarthritis in the hands?

Osteoarthritis: Let's talk about anything and everything!