Electroconvulsive therapy (ECT) or seismotherapy is a little-known treatment for severe depression and certain serious mental disorders. Although this technique suffers from the bad reputation of electroshock therapy in the 1950s, it can nevertheless be very effective.

So what does ECT entail? How does a session take place? How effective is it and what are its side effects?

What is electroconvulsive therapy?

Electroconvulsive therapy (ECT) or seismotherapy is an electric shock treatment administered under anaesthesia. This treatment consists of passing an alternating current between two electrodes placed at the patient's temples to create a seizure with therapeutic effects. 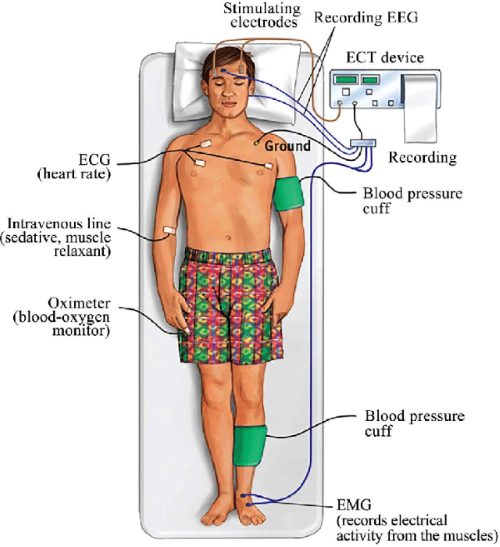 Today, ECT is mainly administered as a last resort to people suffering from severe major depression, certain forms of bipolar disorder, catatonia (motor inhibition) or schizophrenia, when these conditions are resistant to the usual treatments (medication and psychotherapy).

This therapy is not widely available in the UK and is very rarely prescribed as a first-line treatment. According to Raphaëlle-Marie Richieri, a practising hospital psychiatrist in the psychiatry, addictology and child psychiatry department of the Sainte-Marguerite hospital in Marseille: "Generally, it is better to try three or four antidepressants (one after the other) at different doses and long enough before thinking about electroconvulsive therapy".

Despite the good results of ECT, there are just over 100 ECT clinics in England, Wales, Northern Ireland and the Republic of Ireland.

Why is it controversial?

Electroconvulsive therapy has a long and controversial past. ECT was used widely in the 1950s to 1970s (more often than today), and was often used unethically, i.e. without anaesthetic and commonly without consent. It has also been illustrated in popular culture through films and television shows without reflecting the reality of how it is actually conducted. The therapy still carries much of this associated stigma today.

ECT is also known to result in memory loss. It is often temporary, but in some cases it can be more long-term.

Mental health professionals also disagree about the use of ECT. Some view it as a helpful treatment for severe cases, while others believe it should not be used today.

How does a session take place?

An electroconvulsive therapy session takes place in hospital usually on an inpatient basis (meaning you stay in hospital overnight), but outpatient treatment is sometimes possible. It is administered by the psychiatrist, who is accompanied by the anaesthetist.

ECT is administered under general anaesthesia (so the patient is not conscious during the procedure and must fast for at least six hours before treatment), and an injection of muscle relaxant* is given to keep the body from convulsing during treatment. Oxygen is also given through a face mask or tube and a mouth guard is placed in the mouth to keep the patient from biting his or her tongue. The patient's pulse rate and blood pressure are also closely monitored during treatment.

The patient wakes up within 10 to 30 minutes after the therapy is applied. He or she can then go home after a rest period of about 3 hours or go to the ward where he or she is hospitalised.

* The muscle relaxant only acts on the striated skeletal muscles and therefore has no sedative effect. It acts by blocking the nicotinic acetylcholine receptors (nAChRs), which prevents the muscles from contracting.

What are bilateral and unilateral ECT?

How many ECT sessions are necessary?

It is usually necessary for the patient to do a series of 6 to 12 sessions in order for the treatment to work, at a rate of 2 to 3 sessions per week. However, the number of sessions may vary from one patient to another depending on the severity of their condition. This is why the patient's medical condition is assessed after each ECT treatment to see if further treatment is necessary or not advisable.

How effective is ECT?

It can be difficult to exactly measure the effectiveness of electroconvulsive therapy, but it has generally been shown to be effective in treating the symptoms associated with certain psychiatric disorders, especially in patients suffering from severe depression.

According to Professor Emmanuel Poulet (emergency psychiatrist at the Lyon University Hospital): “We know from experience that if a case of severe depression is resistant to two different antidepressant treatments, there is very little chance (only around 10%) that a third treatment will perform better than the previous two. Whereas with ECT, it will give 80% improvement.”

Therefore, ECT's effectiveness varies according to the patient and the type and severity of the mental condition. Some patients find ECT helpful, while others do not. Most patients respond quickly to ECT and see their condition improve but will also see a relapse after some time. Few patients do not see any improvement at all.

Consequently, other "maintenance" ECT sessions may be prescribed to maintain improvement of the psychiatric condition, in combination with medication and/or psychotherapy. These sessions will occur less frequently (once every 2 to 3 weeks) to ensure symptoms do not return.

What are the side effects?

The most common reported side effect of ECT is memory loss. For many patients this is only temporary, and their memories return as they recover from treatment, but for others this may be more long-term. This is why a standard memory and thinking tests are given before treatment and after each session.

Are there any contraindications?

Intracranial hypertension is an unquestionable contraindication to electroconvulsive therapy. This is because electroshock administration can increase blood pressure inside the skull.

Before any administration of ECT, a CT scan is carried out to check the normal pressure in the brain.

ECT involves certain risks: mortality is comparable to that associated with general anaesthesia for minor surgery (1 per 10,000 patients treated or 2 per 100,000 sessions).

What do you think about ECT? Have you ever undergone this treatment before?

Feel free to share your thoughts and questions with the community in the comments below!

My partner had ECT in the mid Sixties, he had been hospitalised due to a depressive phase(he was later diagnosed with Bipolar Disorder) He was told that the treatment would be a sort of rebirth, the trauma or unhappiness he had experienced would be forgotten. His memory was effected for some time, initially the treatment made him quite sick, he vomited sometimes and had severe headaches after each treatment. He thinks that it helped first time around but regrets having further treatment, less effective.

Years back I was in a private hospital for people with different mental health issues, Got chatting to a young man every day who was been treated for depression Seems the medication was not making him any better. and his family agreed to E.C.T. Met him a few days later after a few sessions, he could not speak a word, did not remember my name or where he was. I was shocked. I was under the care of a psychiatrist and asked him about this treatment his reply was over the years he had met people some of who had 100 sessions and were not better. He considered the results let to closed head electrical injury