Gisèle is a member of the Carenity platform in France. She cares for her husband, Jean, who is diagnosed with Alzheimer's disease. She has agreed to share with us about their daily life and her advice on how to live your best life in the face of this condition, which affects many people every year.

Hello Gisèle, what were your husband's first symptoms?

It was many things that began to gradually occur. His short-term memory about recent events began to fade, such as being able to remember and refer to dates (days, dates, years, seasons, months). However, his long-term memory was still very present… he could remember things that happened a long time ago in his life... Every night, various times, he tells me a sad story that happened many years ago during a family reception. Like a broken record!

When the night comes, all of the anxiety problems come back. He will ask about his brothers (all who are deceased). "We will have to send them a postcard to wish them a happy New Year," he tells me. I always say “yes, we still have time.” He sees his children 40 years younger than they are; time has stopped for him. I have to reassure him of what is actually the present, without hurting him, with great care and kindness. 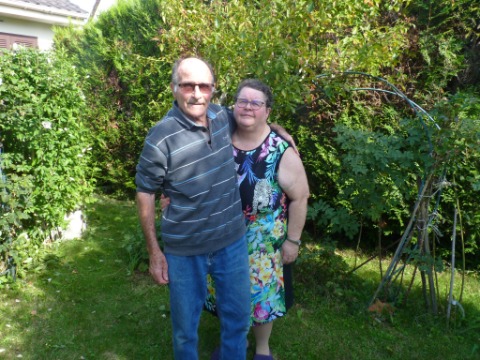 Jean also has difficulty doing everyday tasks like peeling vegetables, sweeping the kitchen, or helping me make the bed. Until last year, he grew vegetables, watered them, and was content, but this year he planted seeds in February and is still waiting for them to grow. Every day he tells me "it's not a good year for vegetables" (he is not able to reference the seasons). In the beginning, I would make and give him the shopping list, otherwise he would forget half; however, now he is not doing any of the shopping.

But there are also other symptoms:

- Disorientation. At the beginning of his condition, we would play cards in the next town over, and in the middle of the drive, he would often say to me, "but where are we going?"

- Attention Difficulty. I need to give him the message at the same time the thing is happening or otherwise the opportunity to do so is lost.

- Loss of good judgment. He sometimes purchases things in excess, without considering the consequences or the practicality of it... like chocolate, oil, fruit, and even a car, which I had to stop the purchase of).

- Loss of motivation, loss of interest and lack of initiative (he is only interested in staying in bed).

- Wandering and roaming at night. He sets the table at 2 o'clock in the morning, then wants to go out and work in his garden. I have to go look for him and bring him in. I prepare him a tea and put him back to bed. Sometimes he gets up every half hour, so I have to be alert all the time. He confuses the day and night and has sleep disorders.

- Inappropriate behaviour. His feelings for me are very alive… sometimes he loses the notion of what he can and cannot do.

- Thermoregulation Troubles. He dresses in warm clothes in both the summer and winter as he is always cold.

- Difficulty recognizing people. He has troubles identifying people by faces and even makes mistakes with his grandchildren and often is unable to recognize them all.

- Loss of appetite and weight loss.

How was the diagnosis? What tests did your husband have to have?

The doctor who treated him had him undergo an MRI, which showed abnormalities. At my husband's request, he also underwent memory tests with a neuropsychologist at the hospital. I filled out a questionnaire and left. Jean did these tests for 2 hours; he was very tired afterwards. After 2 months, the result was an early neurodegenerative disease.

I requested an appointment with a neurologist for him. I was hoping for specific answers, but everything was evasive. The neurologist didn't even mention the word Alzheimer's. He simply recommended putting my husband 100% on a long-term illness*.

The word Alzheimer's was first mentioned by his family doctor. After the consultation with his family doctor, I felt devastated and in a state of shock. How do I explain this to Jean? There is no suffering… he forgets everything. It's like a trip to an unknown place where one must adapt every day.

*A long-term illness (“affection longue durée") in France means that all medical expenses are covered if you have a long-term illness, such as Alzheimer's or MS. In the United-Kingdom, financial help also exists for both carers and patients. Check it out here.

How did your loved ones react?

His children were in denial after I gave them the news, and they felt that the specialist had made a mistake. I had to show them the results in writing because since they did not come often to visit their father, they did not notice the changes in him. This disease destroyed the family, and everything became broken. I am Jean's second wife (35 years now together). His first wife passed away and they had 5 children together. His children wanted to put him in an assisted living home without asking me or him, separating him from me. I had to get a protective order, so now that he is under a reinforced guardianship, only one of his daughters comes to see him and help me. She is very grateful that she is able to spend time with and assist in taking care of her father. The other children have not come to see him in almost a year.

What medical treatments has or does your husband follow?

After eliminating other medical conditions, he was prescribed: Exelon 4.5mg, Amitriptyline at night for depression, Neurontin for nerve pain (sciatica), and a compound of herbs and melatonin for sleep, which are not too strong, not making him "knock out".

From a non-pharmacological point of view, what solutions have been implemented?

Jean sees a speech therapist once a week who ensures he does exercises at least once a week, such as memory games, concentration exercises, attention exercises, orientation activities, and language activities through reading. I continue these exercises and others with him during the week. I also get some assistance from in-home caregivers. Jean also works on calculations, counts numbers backwards or by twos, he tells stories and has to ask questions about the subject. I encourage him to play board games and help stimulate his mind and slow down the progression of his illness. I also encourage him to cook a little (but for the moment he doesn't want to do it), work in the garden (yesterday he cut half the lawn), water the plants, and walk (but for the moment sciatica often keeps him in bed) to help keep him stimulated and active… In short, I have to keep him busy so that he has a taste for life again and doesn't get bored. I also give him massages to relax him.

So, do the in-home caregivers help you?

Yes, I get help from two home caregivers, 4 hours a week. I feel less alone because of their help, I couldn't take it anymore! I can't carry everything on my shoulders. I'm not superhuman. By getting assistance, I feel less isolated. They participate in cleaning, shopping, games...

I applied for help doing the paperwork alone: I printed the necessary documents from the Internet, the town hall gave me the address. An evaluator came to evaluate Jean's degree of autonomy and the government gave me a grant of 4 hours a week. I can have the situation re-evaluated if the need arises and Jean's condition declines.

Jean didn't want this help at first, but he finally accepted it. He likes his caregivers. Jean is OK with it for now.

On a daily basis, what is the hardest thing for you to handle?

His roaming and wandering. At night, I have to always be alert. I have to stay alert so that he does not wander away. I close the blinds, I hide the keys, close the kitchen door... I also turn on the lights at night so that he doesn't fall. I have cleared the rooms. I always have to be alert. Currently, because of this, I don't sleep much.

His fixed and repetitive statements and questions, like a broken record, are difficult on a day-to-day basis. Sometimes Jean doesn't want to change clothes at night, it's like an armour that protects him from the outside world. His world is shrinking: his room, his bed, his garden… Changing clothes is sometimes a difficult thing for him.

How is your husband today and how are you doing?

Jean lets himself be cared for and is less anxious. His sciatica has progressed into osteoarthritis, which unfortunately he often lies on. He suffers and has decubitus complications (constipation, loss of appetite). For my part, I am tired, sometimes exhausted because I am almost alone in this. As I said, one of his daughters comes to see her father on Saturdays to go shopping, otherwise, his family has deserted him, and it is just me. Alzheimer's is the disease of oblivion. I have to trust myself. But my in-home caregivers have just returned from vacation, it will be better in the next few weeks!

Do you feel sufficiently supported and accompanied by the health professionals involved in the care of your husband?

Not enough. Everything we did together, I now do alone. However, I have hired a gardener for larger jobs like hedge trimming, and my caregivers help me a lot. Due to the worsening of his disease and weight loss, the doctor prescribed food supplements to help him. But I don't drive, so my difficulty is shopping, going to the pharmacy, going to the hospital... I learned to shop online because you have to adapt. Doctors don't help us much, like the neurologist's refusal to accept a transport voucher. On the other hand, the speech therapist is doing a great job and I'm looking for a geriatrician for Jean.

What advice would you give to a loved one with Alzheimer's disease?

- Create a family photo album to help with recognizing faces;

- Do not confirm appointments in advance because it can become an obsession;

- Use post-it notes to help your loved one know where things are;

- Use a planner/Create a schedule and write down the date every day (a diary);

- Be patient and maintain a good mood if possible and be able to adapt.

- Exercise the memory, stimulate the mind, and keep active

Thank you very much Gisèle for sharing your story!

What solutions have you implemented to help combat Alzheimer's disease? Discuss it in the comments.

Caring for a loved one with Alzheimer's Disease