Following a decision from the MHRA (Medicines and Healthcare Products Regulatory Agency) on 07 April 2021, Novartis is authorised to market its new drug, KesimptaⓇ. This new monoclonal antibody has also been approved by NICE (National Institute for Health and Care Excellence) and is used in the treatment of relapsing-remitting forms of multiple sclerosis (MS).

Want to know more about this treatment? How does it work? What is a monoclonal antibody?

We explain everything in our article!

What are monoclonal antibodies?

Ofatumumab is the active ingredient in KesimptaⓇ. It is also a monoclonal antibody.

Antibodies are proteins produced by the cells of our immune system (specifically plasma cells, a type of B lymphocyte).

These proteins can bind specifically to bacteria, viruses, cancerous cells or a vaccine (an antibody will be specific to a bacterium for example). Once the antibody binds with its target, it can signal to other immune cells which can then eliminate it, prevent it from reproducing or even destroy the target cell itself. 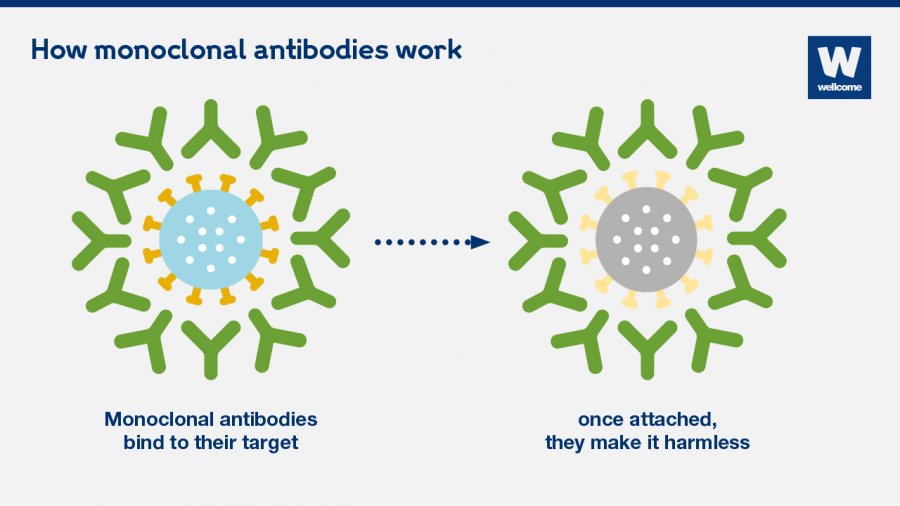 However, these proteins do not only bind to the body's own cells (the non-self or exogenous cells). In fact, in autoimmune disorders (psoriasis, MS, etc.), the immune system mistakenly attacks the self cells, thus creating inflammation. This attack involves, among other things, the use of antibodies directed against endogenous cells.

In addition, during an organ transplant, for example, the immune system will consider the new organ as a foreign element and produce antibodies directed against it. This is why immunosuppressants are prescribed following a transplant, in order to limit this immune reaction.

Monoclonal antibodies (mAbs or moAbs) are based on natural antibodies and are produced specifically to fight a disease.

They are biotherapies, meaning that they are not produced by a chemical reaction but by living cells. Because of their size, proteins are extremely complex molecules to produce artificially. This is why living cells must be involved.

Without going into too much detail about a complex system, the production of monoclonal antibodies involves selecting a cell (bacteria, yeast, human cell, etc.) capable of producing the desired antibody. It will then be exposed to the target protein against which it will secrete an antibody. These cells are then cultured and used to produce our mAb.

Because of their proteic nature, mAbs cannot be taken orally (they are destroyed by digestive juices). They are therefore injected subcutaneously or intravenously depending on the treatment.

As a reminder, in multiple sclerosis, the immune system attacks the myelin sheath, thus disrupting the transmission of information. KesimptaⓇ has received marketing authorisation for the treatment of relapsing-remitting MS.

If you'd like to learn more about MS, you can read our fact sheet on the subject.

The CD20 antigen (a surface protein) is the target of ofatumumab antibodies. This antigen is present on the surface of the majority of B lymphocytes (immune cells) and is a marker for them. Indeed, this antigen is expressed from the pre-lymphocyte B stage to the mature lymphocyte stage. It is also present on B cancer cells (ofatumumab was marketed in the EU until 25 February 2019 under the name Arzerra for the treatment chronic lymphocytic leukaemia (CLL)).

When activated, the complement system engulfs the target pathogens or cells, which then leads to phagocytosis (absorption and destruction) of the target by other immune cells, such as macrophages. Innate immune cells are also involved.

The efficacy of this ofatumumab was evaluated in two randomised, double-blind, controlled Phase III trials (ASCLEPIOS I and II) versus a comparator (teriflunomide). Indeed, among the different phases of clinical trials, phase III studies are generally conducted on large patient populations and aim to measure the efficacy of the treatment against the reference treatment or a placebo.

In addition, the adverse events recorded were in line with and considered manageable compared to the effects induced by treatments already on the market. The European Medicines Agency therefore judged the benefit-risk balance in favour of the benefits. KesimptaⓇ has therefore received a marketing authorisation that is valid in the UK since 07 April 2021. NICE also approved Kesimpta for use on the NHS on 20 April.

Dosage and route of administration

This biotherapy is available in pre-filled pens or syringes. Treatment starts with a weekly injection under the skin for three weeks, followed by a week without administration. The next dose is taken the following week and then once a month.

In addition, the pre-filled pen or syringe form allows patients to self-administer the treatment at home. This represents a novelty, making this treatment the one and only self-injectable monoclonal antibody targeting B lymphocytes.

Aurélien is a fifth year PharmD student at the University of Lorraine in France and writes health articles for Carenity. He is particularly interested in the neuropsychiatric and cardiovascular fields.

What were the first symptoms that you experienced?