Muriel, known as mumuverger on social media, has breast cancer. The cause? The BRCA1 gene. She tells Carenity about her journey with the disease, from the diagnosis to remission, and talks at length about what she felt at each stage with us on Carenity.

Hello Muriel, thank you for agreeing to share your story with us on Carenity! 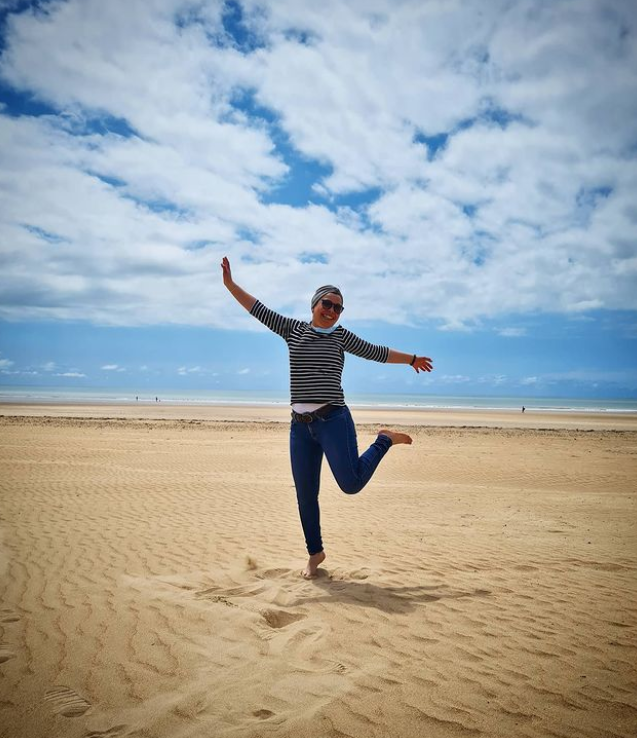 I think I always thought that one day cancer would knock on my door... It's a family thing, well on my dad's side of the family. His mum and then his sister...

Ever since I developed breasts around age 13, I've kept a close eye on them. My gynaecologist didn't see the need for further tests, despite my insistence since I was 25, he said that breast cancer wasn't transmitted from father to daughter.

Later, I learned that genetic inheritance is 50/50 (father/mother)!

So, one autumn evening, 28 October 2015 to be exact, I remember because it's Dad's birthday, I'm in bed and I feel a lump on my right pectoral muscle... I phone my new gynaecologist urgently on the following Monday morning, he takes the emergency seriously and 2 days later, we met for the first time.

After that, everything occurred just before the holidays: biopsy, analysis, ultrasound, mammogram, PET scan... Fortunately, the lump looked localised, small, and hard, less than 2 centimetres and nothing else! On 12 December 2015, my surgeon decided to perform a lumpectomy. He warned me that if on opening it was more extensive, he would close it all up and send me for a mastectomy. He poked around, though, for fear it would spread. So, I came out with a lumpectomy, a slightly less dense breast and a nice10 centimetre scar all along the breast...

Paulo, as I call my cancer, went for analysis during the holidays and I tried to get through them as if they were my last. Because according to the test results, I was going to know what kind of life I would live in the new year 2016.

What an anguish this end of year was! But I had prepared myself for the worst so as not to be upset if the worst happened...

What treatment(s) did you undergo?

I got the verdict on 4 January 2016. I would get the "complete package", meaning:

At 33 years old to have this extent of cancer is not normal, so they launched a series of genetic tests... Before starting treatment, the oncology team suggested fertility preservation (freezing my eggs) in case the treatment affected my fertility. I wasn't a mother yet, so they really listened to me.

We only had a month to boost my hormones and retrieve. As a result, we only got 3 "little ones" in the freezer! That's better than nothing, I guess!

A few months later, the genetic test confirmed a mutation on the BRCA1 gene.

They were able to find it eventually - it turns out an uncle hadn't done the job of telling the entire family about the gene back in 2007. It was my cousin who, on learning of my case, told my dad about the gene with a letter from the Curie Cancer Institute. That helped the geneticists narrow down the search for the bad gene.

It's the same gene as Angelina Jolie, who was one of the first to publicly have a mastectomy as a preventive measure.

My treatments were so-called "preventive" treatments, mostly related to the nasty BRCA1, I had no tumour to fight against. I think that's why I didn't have too many side effects. But these treatments destroy everything, good or bad cells. And even 5 years after the treatments I haven't recovered, but I'm here and that's priceless!

Are you currently in remission?

I am still in remission today, 5 years after the treatments, next June. I'm 5 years in and I'm things are starting to get back to normal in my life, you could say I'm cured... Even if I still have this fear, I manage to live with my disability and with my little lymphoedema in my right arm due to the axillary lymph dissection, and the ticking of the clock as time goes by...

Has cancer changed your outlook on life?

I am more in tune with myself, I let go of my daily worries and I enjoy my family as much as possible. I fight every day to change mentalities, to prevent rather than cure, if you take the time to do it you can get through it, I am the proof! There is not just one such cancer but many cancers! We must speak out about it, cancer isn't always a death sentence, even if some do not win the battle, we must live 1000 times harder for them.

We also have to educate ourselves about cancer from the earliest age, have access to the best treatments and advance research. Every day counts to save lives, life is priceless.

Cancer and its treatments can cause major physical changes. How did you manage to come to terms with your changed appearance?

When my oncologist told me about my treatment and the 90% certainty of alopecia (hair loss), I cried, I was in a panic... because, really, no one knows what his or her head looks like: What is it shaped like? Is it good-looking, long, wide... Deformed?

So, as soon as I was told, I started by shortening it, with a boyish haircut that I kept for about 2 months, between the operation and the start of the chemotherapy, then came step 2: 15 days after my first dose of chemo, I shaved it all off...

The oncologist was right. Luckily, my head was beautiful, I felt free because hair loss is painful. Physically speaking, it stings, itches, heats up, and sometimes you feel like you're being pierced by sharp spikes! You can hardly put your hand over it... and then psychologically...

What did you do to maintain your femininity through your breast cancer treatment?

In 2016, there weren't as many accessories on the market as there are now... I started to appreciate my image with my husband's eyes. On the day of the shave, he helped me finish my transformation and when he looked at me, he said, "everything suits you, even being bald..."

Then, with the softness of my head, I promised myself one compliment a day, rather than seeing the bad, I looked at the beautiful in the mirror... I took care of it as if it were precious. And then, the freedom of no longer blow-drying and therefore more time to highlight this new face with make-up and the subtle touch of earrings...

Before, I always went out with my hair done but no make-up, but that was before... since then I always go out with my make-up done!

My advice: if you are new to treatments, don't shave your head straight away, go through the stages of shortening your hair little by little..., in order to accept each of these stages, men or women, it's difficult but our head is not only made of hair, we have other assets that must be highlighted!

There are many alternatives and tricks today. There's no point in spending money on a wig that won't suit you... The person you were before your illness won't come back... You're going to grow, evolve, discover yourself. So, even if the steps will not be easy, there are certain tools or supports that can help you to assert yourself, to reveal yourself... Many brands, since 2016, have emerged and create hyper trendy accessories and care... taking care of yourself should be your priority!

Have you experienced any other side effects from cancer and its treatment?

There is the weight gain that that's not necessarily talked about. Indeed, the word "cancer" is often associated with weight loss...

However, I gained over 26 pounds (like you would during a pregnancy), I was dreading the weigh-in before the chemotherapy. How many kilos had I gained in 3 weeks? One pound each time, even though I was walking and eating a balanced diet... but the lack of activity and the cortisone were playing with me.

So, at the end of the treatments, the scale showed 176 pounds!

I took matters into my own hands with my regional cancer association, I opened the door, and I was entitled to 4 sessions of nutritional coaching to identify my needs and adapt the programme. I'm still doing this programme now. I've lost the 26 pounds I gained, and I have maintained this weight 5 years later. It was a progressive loss over 2 years.

You named your cancer "Paulo". Why did you give it a name? And why this name?

I gave it a name because I had to visualise and personify it when it gave me a hard time! My husband and I used to say, "You can suck it, Paulo!"

Then I created my Facebook page: "My Crab Paulo" to share news and updates with my loved ones, because I was overwhelmed with calls and texts. I was mentally and physically exhausted, I didn't know what to say when faced with their fears... I was terrified myself, it was my virtual barrier, I published what I wanted... it turned out to be liberating!

This was my guiding light on the days when things weren't going so well... a 'community' formed and united around me, like a second family.

And then, in January 2016, there wasn't much information about young women and cancer. We don't have the same issues and desires as our elders... so I decided to share everything I found useful.

In the summer of 2016, I landed on Instagram and there, it was even more powerful because there were so many "young" people! I was moved my fight, their fight, took on another dimension, a strength united us!

I don't want to keep quiet anymore when the statistics are wrong! The figures about breast cancer talk about 50-74-year-olds, the awareness campaigns are not adapted... we're not heard!

Breast cancer does happen before age 40! Us younger women with breast cancer, we want help with treatments, prevention, support care, that doctors diagnose us more quickly so that we can avoid delays in diagnosis and crises, to receive support when going back to work and after cancer... There are so many inequities!

So that's why I'm still here, to say that I'm cured, that it's possible, to help others in this journey, and to continue my fight so that tomorrow I can save more!

Finally, what would you like to say to other Carenity members reading this?

Research is progressing and I hope that one day we will all be cured of cancer!

Self-examination saved me - we know our own bodies, we know! You have to see a gynaecologist regularly and insist if you have to! There are no big or small cancers, there are CANCERS and you never come out unscathed. Don't give up hope, this interlude will change you, take care of yourself, that should be your guiding force!

Love, laugh, live simply with your loved ones, ask for help if you need it, there will always be someone to listen to you here, on social media, or elsewhere in patient support groups or in the oncology department. Ask for information at your health centre.

Many thanks to Muriel for sharing her story with us on Carenity!

Was this testimonial helpful to you?
Give it a like and share your thoughts and questions with the community in the comments below!
Take care!