What is it like to be a loving husband and father and living the life to its fullest, while overcoming Multiple Sclerosis?  I'm Jamie and I'm 40 years old and live in Southern England with my wife and two teenage children.

Hello Statto, could you introduce yourself in a few lines?

Hi, I'm Jamie and I'm 40 years old and live in Southern England with my wife and two teenage children. Before becoming ill, I was an Associate IT Director running a fairly large technical group in the Healthcare Industry. I'm a bit of a science and comic book nerd but balance that off with my love of Ice Hockey and football both only as a spectator. I also enjoy the gym and recently discovered I enjoy scuba diving. 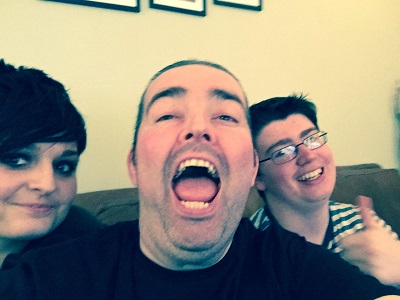 How did you find out you had MS and how did you get your diagnosis?

It's not an easy answer as I was misdiagnosed for 7.5 years! However it started off with a numbness radiating down my leg. I assumed I'd ruptured a disc in my back as I always had some sort of back injury on the go, however they quickly ruled that out. They referred me to a neurologist and the long process of diagnosing me began. After about a year I was diagnosed with NeuroSarcoidosis, which was very rare but was the only possibility as everything else (including MS) had been ruled out. However after 7 yrs of poor treatment response a review of my diagnosis was done and this time my brain scan lit up like a Christmas tree, presenting as classic MS. A lumbar puncture then came back as positive for MS, despite being negative 7.5 yrs earlier. That was just this past October.

What was your reaction when you found out you had MS?

Mixed. I knew before the new diagnosis was confirmed that it was back on the table as a possibility. I saw that possibility as being good as it was neither better nor worse from the point of view of symptoms. However there was much more support and better treatment options available. So I was in fact hoping for a diagnosis of MS which felt a bit weird. What MS did bring with it was a better understanding of prognosis which made me have to face up to a few things which was harder than I thought and my mental health was definitely affected.

You formally have MS since 2014, what have been the major impacts of the disease on your everyday life? (the relationship with your family and friends, complications…)

When the symptoms started 8/9 years ago it was really a worry but I was fairly stoic about it all and was pretty stubborn about it all. I resisted help and aids and waited far too long to get a cane, which inadvertently probably caused my family more worry. It finished my 5-aside football career, which was probably a good thing as I was always injuring myself (and I wasn't that good either!).  However after few years it started impacting my work. My company was fantastic and very supportive but just over 5 years ago I had to give it up. I fought it hard as I enjoyed working but I was no longer doing myself or the company justice.

Whilst I tried to keep busy and stay positive that loss of structure was hard. I started to become isolated socially and more introverted, later I learned that it was probably the start of me getting depressed. It was also creating a lot of concern in my family and friends and definitely was very hard on my wife and children. I didn't realize it but I started leaning on my amazing wife hard, too hard. My wife ended up holding everything together and it was not fair on her. It's probably what I find the hardest to process. Even though I know it was not really my fault I'm not sure I'll ever truly forgive myself as she was in so many ways having to do it all on her own.

In the short term getting the correct diagnosis was tough as I was formally diagnosed with depression at the same time. Facing up to the realities of everything was incredibly hard and I don't mind admitting I nearly fell apart completely. However my wife and kids served as my anchor and I began to fight back and started putting myself back together. It's taken some time but with their help and support I'm coming through the other side. My wife has stuck by my side and she is truly wonderful. Still the love of my life. My kids have also helped me just by being them.  They will always do anything to help me but mostly they just fill me with a sense of pride.

As for today, how do you manage your life with MS?

Physically I take everything one day at a time. I look after my health much better than I used to and have my weight down from 24 to 16 stone, which isn't too bad as I'm 6' 4" tall. Still a bit to go though. I started to attend a regular physio class run by the MS Society which has been a huge help both physically and socially.

However I've learned that the most important thing to look after is your mind. Firstly be honest with those around you and let them help and support you. Trying to protect them by playing down how you feel, fools no one and puts up barriers. Those closest to you know when you are struggling, no matter how hard you try to hide it. Make sure you keep structure in your life. I used to work 60hr weeks and going from that to nothing leaves a huge void.  Since rebuilding myself I've started attending the physio class, I go to an informal MS Coffee morning and have got involved in a local charity both as a community volunteer and a trustee. My life's not the same, it’s just different. Accepting that fact was key as it allowed me to let go of what I had lost.

I feel strong mentally once again and feel myself for the first time in quite a few years. My wife, who has been a rock throughout, must have missed me. I'm now in a place where I can be a rock for her once again. I'm back and she deserves that.

Focus not on what you've lost but what you have and what you might gain. It used to be hard to leave the house but now I find it hard to stay in. I still have so much and so much to look forward to. Last year I became an occasional wheelchair user on the back of two very hard relapses. This year I've used it once.  I'm getting stronger and my mobility is improving every day. I also discovered scuba diving less than a week ago and now plan on getting PADI qualified. The truth is I probably wouldn't have done it had I not become unwell as I never had the character to overcome my anxiety around water. Now I've learned to embrace life and make the most of everything.

The MS won't hold me back anymore, I won't let it.

As always, I love the stories and to see how we are all going through rough times but there has to be a positive attitude always in the middle, if not you just crumble down.

Thanks @Statto for sharing your story with us and kudos for the scuba diving it sounds great if it is the kind of thing you like :)

Stratto (Jamie) - absolutely LOVED your story! HUGE congratulations on losing so much weight and simultaneously becoming so much healthier!  I personally think medical conditions like MS is much harder to deal with for men than women just because of the natural, inherent gender differences (have found men and women think so differently - possibly due to sociological as well as hormonal influences)?  I consider myself so, so fortunate that my MS really didn't start to become really, obviously, problematic until I was in my 50's and therefore my heart goes out to anyone younger.  Sooooo agree with so much you said/shared with us - our minds are more problematic than our physical problems, it's important to let people know how you are feeling (I hid so much for so long) but have now reached the point where I can't do this anymore and actually find this so much easier, more honest and have also helped me accept who I am and what I can and can't do at any particular time.  No one is an island......there will always be times when we can be peoples' rock(s) and other times when others need to be ours.  So, so glad you shared your story with us - good on you and sure it will help so many others.  Keep up the good work, know you will! x

Depression does not define who you are

Suicidal thoughts, not coping, how to get treatment without carrying out my plans?

How to deal with non understanding family and friends