Our member, @Daisydef‍, has opened up to us about her journey to being diagnosed with schizophrenia after years of troubling symptoms. She is now on a healthy path as she benefits from getting the right diagnosis and medications. Read her story and comment below.

1, Hello Sarah, thank you for agreeing to speak with us about your schizophrenia. Firstly, can you introduce yourself to our readers?

My name is Sarah and I’m 41 years old from United Kingdom. North Wales to be exact. In a town known as the “Queen of Resorts”. I have two white German shepherd dogs and I live alone with them but do receive care from an agency three times a week and also from the community mental health team. 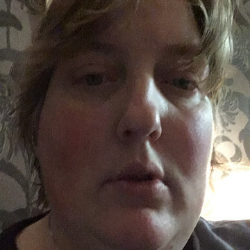 2, When did you start experiencing symptoms of schizophrenia? What were the symptoms that you were suffering from?

I had symptoms such as voices. Telepathic communications and beliefs of impossible things. Thought control. Instructions from others such as the devil.

3, Did you ever experience catatonia?

(Editor’s note) Catatonia refers to a set of symptoms that might develop in some patients with schizophrenia. It can include periods where the individual moves very little and does not respond to instructions.

I never experienced Catatonia but do still suffer from extreme paranoia. Something my consultant referred to as paranoid ideation. Currently I am well, but I am still acutely paranoid it never goes away no matter how well I get. Just like other symptoms that are constantly there. Sometimes they’re hardly noticeable and I know they’re not real. It’s when I believe it a million percent that I usually get detained under the mental health act.

4, What was your experience like being detained by the mental health act? What behaviour or incidents caused this to happen?

Being detained under the mental health act feels like such a loss of liberty and control. It made me feel powerless. Trying to leave the hospital or refusing to go into hospital were the usual reasons for being detained but also for being a danger to myself.

5, Schizophrenia is known for the impact it has on thinking, emotions and decision making. Was this the case with you?

Yes, my thinking, emotions and behaviour can all be affected by this illness. I have been too scared to leave the house because I’ve thought the police were going to shoot me. Not undressed or showered due to thinking there was cameras and listening devices etc. I have stripped naked in front of others and my thoughts have been interfered with. This illness can be terrifying and debilitating. I have been so convinced the hospital staff have been trying to poison me that I wouldn’t take my medication and have been restrained and injected with tranquilliser drugs.

6, How have the symptoms of your schizophrenia changed since your diagnosis?

In 2016 I was finally diagnosed with schizophrenia. I had been ill for 13 years and possibly more. Since receiving the diagnosis it has been a blessing as I’m now on the right medication and it’s made my symptoms easy to manage. I’ve received the right care and that helps me live independently. When they first mentioned to me in hospital that I was a schizophrenic I was so very upset and scared and I wouldn’t accept it. However, once I came to terms with it I felt it explained a lot about my life. It gave me answers to lots of questions such as why do I feel like this and why is this happening etc.

7, How long did it take you to become diagnosed?

For many years I had doctors who didn’t really seem to take me seriously. Finally in hospital in 2016 I had an amazing doctor who I felt was determined to get to the bottom of my behaviour. Being diagnosed was the best thing that happened to me.

8, What treatment are you currently on?

I’m currently on medications that suit me and don’t cause horrendous side effects that antipsychotic medications can cause. I’m able to drive, function and live a relatively normal life. However, I find that decision making can be an issue as I’ve ended up with a condition called executive dysfunction which is a form of brain damage from schizophrenia.

9, You are suffering from several other conditions, what are they? Does medication ever conflict with others?

I do suffer with numerous other illnesses including diabetes, psoriatic arthritis and chronic obstructive sleep apnea. At times getting medication for minor illnesses can be awkward because of drug interactions. I’m currently on an antipsychotic and antidepressants and also a mood stabiliser medication for various aspects of my mental health.

10, Have you tried any alternative treatments, such as Cognitive behaviour therapy (CBT) or Cognitive enhancement therapy (CET)?

I did try them and it wasn’t for me and I can’t say I benefited from it. Talking therapy is also not really for me.

11, How has your condition impacted your relationships? Do you feel they understand what you are going through?

My parents don’t seem to want to have anything to do with me due to this illness but my brother and his family are very supportive. I have amazing friends but when I was more vulnerable I had a lot of people take advantage of me financially etc.

12, What advice would you have for others experiencing this disease?

I would advise anyone who has this illness to firstly always take their medication. Stopping it is the quickest and most guaranteed way to end up in hospital. Also, if you’re not happy with how your meds are impacting the quality of your life then discuss this with your doctor. There are many different medications available, it was trial and error for me to find the right balance.

I wish you all the best @Daisydef‍ !

@Louise-B‍ thank you so much

I have tagged some poeple who I think could be interested in this testimonial :)

I am saddened to hear how you went through 'The System' suffering from Schizophrenia without people taking you seriously enough. I think that many instances of Mental Illness go un-noticed for years, which in turn causes more illness maybe of a different type, like Depression, Extreme Paranoia, and so on.

Now that you have found the medication that suits your particular set of conditions hopefully you will find that 'stable plain' where you can function relatively normally, without too many episodes suffering the symptoms that you have come to terms with albeit with medication and community support.

My 'door' is always open if you need to chat about anything? My conditions are very numerous and need to be 'juggled' around with the help of my Consultant and other Medical Staff and my local GP Surgery Care Team.

Carenity is ALWAYS here for you, if you need someone to talk to. Never forget that you are NOT ALONE. You now have the Support and Guidance of the whole Carenity Family.

@richard0804 Thank you for your lovely message Richard, I am sure @Daisydef‍ appreciates your kindness :)